After a successful trial program aimed at deterring people from pointing lasers at aircraft—by rewarding those who provide information about individuals who engage in this dangerous crime and aggressively prosecuting the perpetrators—the FBI is expanding the campaign nationwide.

“Aiming a laser pointer at an aircraft is a serious matter and a violation of federal law, said Joe Campbell, assistant director of our Criminal Investigative Division. “The public awareness campaign we launched in February has been effective in reducing the number of incidents, and our hope in expanding the program is that people will think twice about illegally using these devices.”

A key part of the publicity campaign is reward money. For the next 90 days, the FBI will offer up to $10,000 for information leading to the arrest of any individual who intentionally aims a laser at an aircraft.

“We want to encourage people to come forward when they see someone committing this crime, which could have terrible consequences for pilots and their passengers,” said George Johnson, a federal air marshal who serves as a liaison officer with the Bureau on laser issues.

The original initiative, which began nearly four months ago, took place in 12 FBI field offices where “lasing” incidents are prevalent. Since then, there has been a 19 percent decrease in the number of reported incidents in the major metropolitan areas of those offices.

Now, the Bureau—along with the Federal Aviation Administration (FAA) and the Air Line Pilots Association, International—are extending the program to all 50 states, Guam, and Puerto Rico. We are also working with state, local, and international law enforcement on the campaign, and we are conducting outreach to schools to educate teens about the dangers associated with lasing.

When aimed at an aircraft, the powerful beam of light from a handheld laser can travel more than a mile and illuminate a cockpit, disorienting and temporarily blinding pilots. Those who have experienced such attacks have described them as the equivalent of a camera flash going off in a pitch black car at night. As of December 2013, the FAA had documented at least 35 incidents where pilots required medical attention after a laser strike.

Interfering with the operation of an aircraft has long been a federal crime, but in 2012, a new law made it a felony to knowingly point the beam of a laser at an aircraft. The new law lowered the threshold for prosecution, Johnson said, “and the trend is on the rise for jail time in these cases.”

In March, for example, a 26-year-old California man was sentenced to 14 years in prison for aiming a laser pointer at a police helicopter and a hospital emergency transport helicopter. The man and his girlfriend were using a device that was 13 times more powerful than the permissible power emission level for handheld lasers. The girlfriend was also convicted and recently sentenced to a two-year prison term.

“We want to encourage people to come forward when they see someone committing this crime, which could have terrible consequences for pilots and their passengers.”

Since the FBI and the FAA began tracking laser strikes in 2005, there has been more than a 1,000 percent increase in the number of incidents with these devices, which can be purchased in stores or online for as little as a few dollars. Last year, 3,960 laser strikes against aircraft were reported. It is estimated that thousands of attacks go unreported every year.

If you have information about a lasing incident or see someone pointing a laser at an aircraft, call your local FBI office or dial 911.

A suspect directing a laser pointer at a helicopter is arrested by police on the ground.

The FBI, the Federal Aviation Administration (FAA), and the Air Line Pilots Association, International are campaigning to educate the public that lasing is a threat to aviation safety and it’s a federal crime 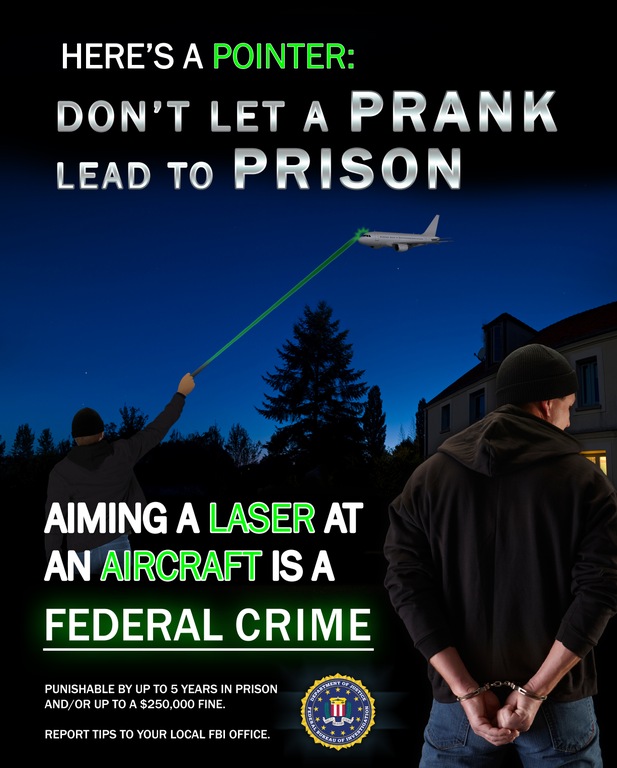 Rural poster (above) and flyer (below) 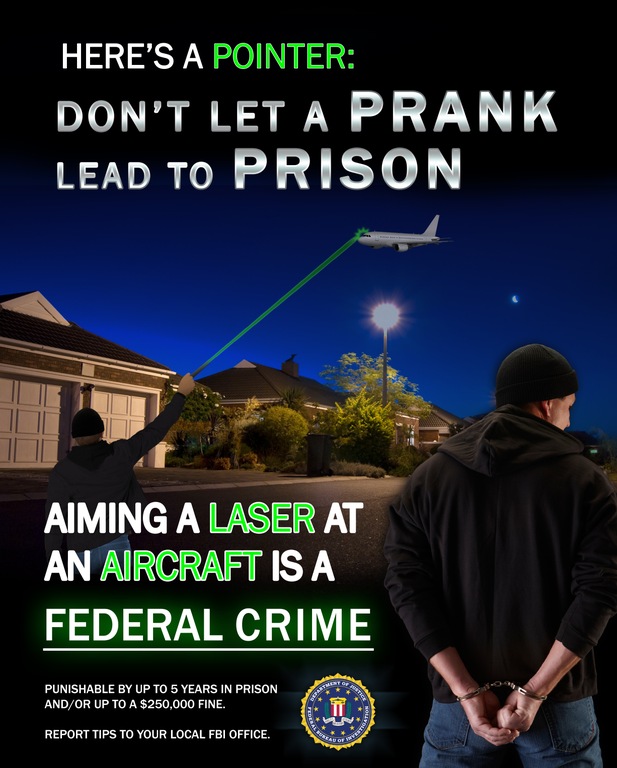 Suburban poster (above) and flyer (below) 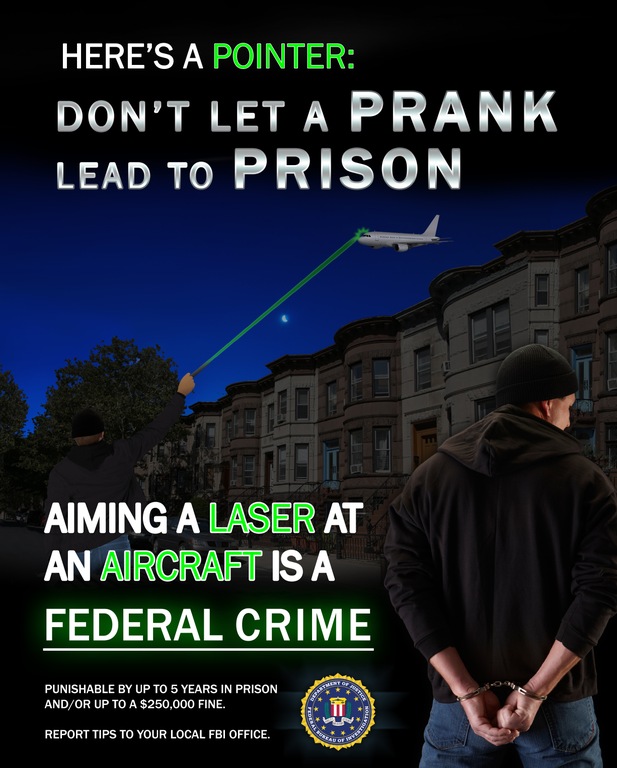 Urban poster (above) and flyer (below)

Multinational effort disrupts malicious software that has stolen millions around the world.