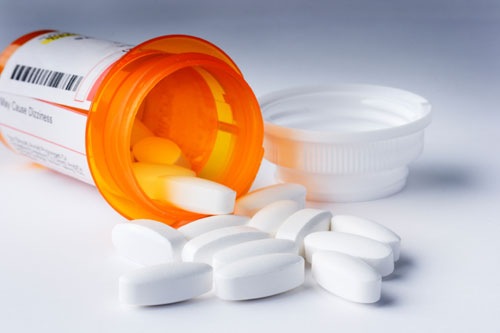 A Florida man has been sentenced to prison for his role in importing cancer drugs manufactured overseas and then illegally selling them to doctors in the U.S.—and two doctors who bought the deeply discounted medicines have been held accountable as well.

Bean and an associate used a marketing technique known as “blast faxing” to target oncologists around the country. The one-page fax that arrived in hundreds of doctors’ offices advertised generic cancer medicines at 20 to 35 percent discounts—and led doctors to believe that the drugs were approved by the Food and Drug Administration (FDA) as required by law.

In fact, the drugs—marketed in the U.S. as Gemzar7, Taxotere7, Eloxatin7, Zometa7, and Kytril7—were manufactured in Turkey, India, and Pakistan and were not approved by the FDA. The drugs were shipped from overseas to California, where they were repackaged and illegally sent to doctors in California, Florida, Texas, and elsewhere.

“Our investigation identified over 50 doctors across the country who purchased the cancer drugs from Bean’s online GlobalRX Store,” said Special Agent Brad Godshall, who worked the case from our San Diego Division. “Ultimately, we were able to dismantle the entire operation.”

Although many of the doctors who purchased the drugs were unaware of the fraud—some even became suspicious and notified authorities when they received shipments with foreign labeling—Godshall believes “many of the doctors who ordered from Bean didn’t do the due diligence that their position required of them. They simply relied on the representations of a con man.”

Two doctors have admitted knowingly buying the foreign drugs. One of them, a Pennsylvania oncologist whose practice purchased nearly $1 million worth of the misbranded drugs, was recently fined $100,000 and ordered to place ads in two medical journals warning of the dangers of unapproved drugs (see sidebar).

Between 2005 and 2011, Bean illegally sold more than $7 million worth of prescription oncology drugs to doctors in the U.S. Cancer medicine is expensive, Godshall explained. “A single course of chemotherapy can cost hundreds of thousands of dollars.” At the same time, many cancer patients being treated by oncologists are eligible for Medicare, and reimbursements to doctors from Medicare have been cut, providing further incentive for physicians to buy non-approved discounted drugs. “All those factors added to Bean being able to successfully carry on his fraud for so long,” Godshall said.

The drugs Bean fraudulently sold turned out to be the foreign equivalents of the same drugs manufactured for the U.S. market. But without FDA oversight, there is no guarantee that drugs coming into the country illegally aren’t counterfeit and unsafe, Godshall said. “The point of the law is to protect our supply chain here in the United States and to protect the health of American citizens.”

He added, “You go to a doctor and expect that they are going to treat your disease and not knowingly expose you to any dangers. But when doctors use drugs that have not been approved by the FDA, there’s no telling what you are getting. And that puts a patient’s health in jeopardy.” 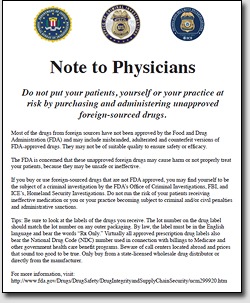 A Pennsylvania oncology practice was recently fined $100,000 for using unapproved cancer drugs, and the magistrate who imposed the fine also ordered the practice to place an advertisement in two medical journals warning of the dangers of using such drugs.

The ad, which will appear in upcoming issues of the New England Journal of Medicine and the Journal of the American Medical Association, is titled “Note to Physicians” and states, in part, “Do not put your patients, yourself or your practice at risk by purchasing and administering unapproved foreign-sourced drugs. Most of the drugs from foreign sources have not been approved by the Food and Drug Administration (FDA) and may include misbranded, adulterated and counterfeit versions of FDA-approved drugs. They may not be of suitable quality to ensure safety or efficacy.”

“The advertisement will really help get the word out to the medical community about the danger—and illegality—of buying discounted unapproved drugs,” said Special Agent Brad Godshall, a veteran health care fraud investigator in our San Diego Division. “Using only drugs approved by the FDA helps protect the supply chain from counterfeit and potentially unsafe drugs, and ultimately helps protects patients, Godshall said.

View the full text of 'Note to Physicians,' or download the note (PDF)

Serial Killers, Part 2: The Birth of Behavioral Analysis in the FBI

Story about serial killers and the birth of behavioral analysis in the FBI.