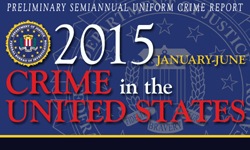 The FBI’s latest Preliminary Semiannual Uniform Crime Report, which contains data from January to June of 2015, revealed overall declines in the number of property crimes and overall increases in the number of violent crimes reported by law enforcement when compared to figures from the same time in 2014. According to the report, property crime was down 4.2 percent overall from 2014, and violent crime was up 1.7 percent overall.

The full Crime in the United States, 2015 report will be released later this year.

January is National Slavery and Human Trafficking Prevention Month, and the FBI’s efforts to combat trafficking will continue unabated in 2016.