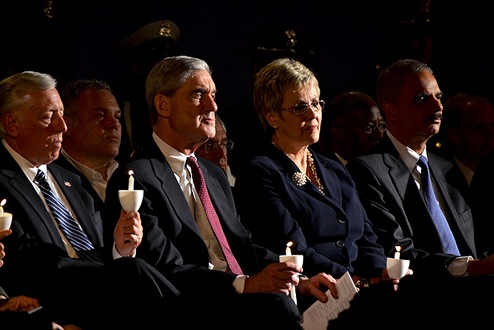 FBI Director Robert S. Mueller holds a candle during the dedication of names of fallen officers May 13 at the National Law Enforcement Officers Memorial. With him were (from left) Rep. Steny Hoyer; Linda Moon, national president of Concerns for Police Survivors; and Attorney General Eric Holder. View Photo Gallery

The week’s events began Sunday evening with a candlelight vigil held at the National Law Enforcement Officers Memorial. The names of 362 fallen officers were read aloud, to be added to the nearly 20,000 other names permanently etched into the memorial’s walls. The event was underscored by a preliminary report issued today that showed 72 law enforcement officers in the U.S. and Puerto Rico were feloniously killed in the line of duty in 2011; 50 were killed accidentally. The FBI will release final statistics this fall in the Uniform Crime Reporting (UCR) program’s publication Law Enforcement Officers Killed and Assaulted, 2011.

“These men and women place the safety and security of others above their own,” Attorney General Eric Holder said in remarks delivered at Sunday’s ceremony. “When facing uncertain dangers and confronting unpredictable threats, they consistently respond with courage, selflessness, and strength. And every day—in communities nationwide—their contributions are felt and deeply appreciated.”

Today, FBI Director Robert S. Mueller issued a video message (below) recognizing officers for putting their lives on the line every day. “The FBI is proud to stand shoulder to shoulder with our law enforcement colleagues as we continue our work together to protect our families and our communities,” he said.

Also today, Director Mueller presided over a memorial service at FBI Headquarters to honor those lost from the FBI family, including two agents who passed away last year. Among the attendees were former FBI Directors Louis Freeh, William Sessions, and William Webster. Mueller said fallen officers and agents leave behind an enduring legacy and through their sacrifice set a standard for which we are forever grateful.

How to Spot a Possible Insider Threat

Economic espionage is a significant threat to our country’s economic health and security.