Operation Cross Country VI, part of the Bureau’s Innocence Lost National Initiative, was conducted over the past 72 hours in 57 cities around the country with the help of state and local law enforcement and the National Center for Missing & Exploited Children (NCMEC).

“Child prostitution remains a major threat to children across America,” said Kevin Perkins, acting executive assistant director of the FBI’s Criminal, Cyber, Response, and Services Branch. “It is a violent and deplorable crime, and we are working with our partners to disrupt and put behind bars individuals and members of criminal enterprises who would sexually exploit children.” 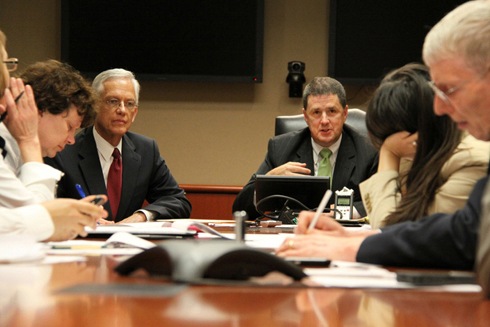 The Innocence Lost National Initiative was launched in 2003 by the FBI’s Criminal Investigative Division in partnership with NCMEC and the Department of Justice’s Child Exploitation and Obscenity Section.

To date, 47 Innocence Lost Task Forces and working groups have recovered more than 2,200 children from the streets. The investigations and subsequent 1,017 convictions of pimps, madams, and their associates who exploit children through prostitution have resulted in lengthy sentences—including multiple sentences of 25 years to life in prison—and the seizure of more than $3 million in assets.

Operation Cross Country national sweeps usually grow out of local law enforcement actions—officers and other task force members target places of prostitution such as truck stops, casinos, street “tracks,” and Internet websites. Initial arrests are often for violations of local and state laws relating to prostitution or solicitation. Intelligence gathered from those arrested can reveal organized efforts to prostitute women and children across many states. FBI agents further develop this information in partnership with U.S. Attorney’s Offices and the Department of Justice’s Child Exploitation and Obscenity Section to bring federal charges against pimps and other sex traffickers.

“It is clear that child prostitution and sex trafficking do not just occur somewhere else on the other side of the world,” said Ernie Allen, president of NCMEC. “These insidious crimes are occurring in American cities, and the victims are American kids.”

At a press conference today at FBI Headquarters in Washington, D.C., Allen thanked the FBI for its leadership over the past decade in fighting domestic sex trafficking. The Bureau, in turn, expressed gratitude to the more than 8,500 local, state, and federal law enforcement officers representing 414 separate agencies who participated in the most recent Operation Cross Country and ongoing enforcement efforts.

In addition to its enforcement successes, the Innocence Lost National Initiative brings state and federal law enforcement agencies, prosecutors, and social service providers from across the country to NCMEC, where the groups receive training together.

J. Edgar Hoover was just 18 years old when he took his first job in government—an entry-level position as a messenger in the orders department of the Library of Congress.