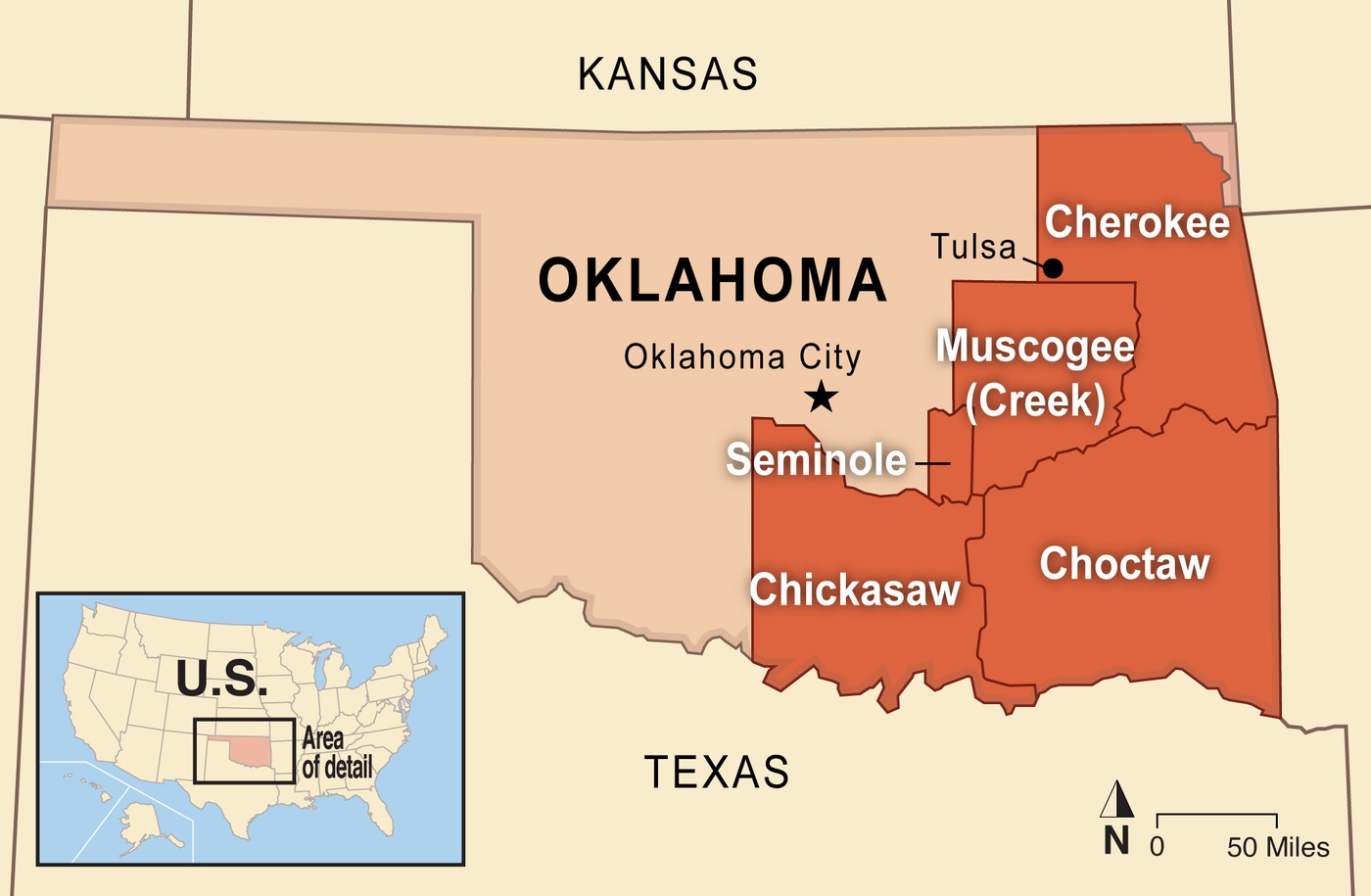 A Supreme Court ruling on July 9, 2020, affects lands of the Muscogee (Creek) Nation, as well as four other Oklahoma tribes. The ruling effectively expanded the FBI's criminal law enforcement jurisdiction to cover roughly 45% of the state.

A year ago, before the United States Supreme Court issued a ruling that affirmed that much of the eastern half of the state of Oklahoma is tribal land, the FBI there handled about 50 criminal cases a year involving Native Americans. Now, the Oklahoma City Field Office manages thousands of cases.

The exponential growth was the result of the sudden expansion of FBI’s federal criminal jurisdiction since the court ruling on July 9, 2020, which reaffirmed the existence of the Muscogee (Creek) Nation Reservation. The landmark ruling, which determined that the U.S. government never disestablished the American Indian reservations there in the early days of Oklahoma’s statehood, reverted nearly 45% of the state back to Native American reservation land. That, in turn, transitioned criminal jurisdiction from the state back to the FBI.

The FBI investigates the most serious crimes in Indian Country, including murders, rapes, and child sexual abuse. In most of eastern Oklahoma, criminal cases that were handled by state and local authorities are now under federal jurisdiction—including closed cases that are being re-opened because of new questions about their jurisdiction. The expanded federal role has made the Oklahoma City Field Office one of the FBI’s busiest.

“The case volume that we are experiencing is unprecedented,” said Melissa Godbold, special agent in charge of the FBI Oklahoma City Field Office, which has borrowed special agents, intelligence analysts, victim specialists, and other professional staff from across the Bureau. Dozens of agents are on 90-day rotations to the region, working to ease the crush of cases and make sure criminals don’t slip through cracks during the transition. Victim specialists from around the country are on two-week deployments to Oklahoma City to ensure victims from cases old and new are tended to and provided resources the federal government is obliged to deliver.

‘It’s Our Every Day’

“The challenge for us is that we must provide this basic level of policing in the eastern half of Oklahoma, but we also have to ensure we are still doing all the things the American public expects the FBI to do,” said Godbold. “We're investigating terrorism crimes, we're going after spies, we're making sure public corruption doesn't go unpunished. So, it’s getting the base level of policing covered along with the top level of policing and making sure all of that happens at the same time.”

“The challenge for us is that we must provide this basic level of policing in the eastern half of Oklahoma, but we also have to ensure we are still doing all the things the American public expects the FBI to do.”

For some agents who may have trained to investigate terrorism cases or white-collar crimes, the temporary duty in Oklahoma is eye-opening. Responding to murder scenes and rapes is typically the job of front-line police. “Now, we are the police for serious crimes involving Native Americans in half of the state,” said Godbold, who was raised in Oklahoma. “It’s gut-wrenching and it’s our every day.”

The FBI has a long history of working major crime scenes in Indian Country alongside local partners like tribal police and the Bureau of Indian Affairs. In 1994, the FBI established Safe Trails Task Forces to leverage federal, state, local, and tribal law enforcement resources to handle Indian Country crimes and seek justice for victims. There are about 574 federally recognized American Indian tribes in the U.S., and 39 of them are in Oklahoma. The FBI has federal law enforcement responsibility on nearly 200 reservations and works closely with tribal police and BIA in most cases. But the sudden transition in Oklahoma—where large swaths of land now fall under the jurisdiction of the Muscogee (Creek), Cherokee, Chickasaw, Choctaw, and Seminole Nations—has been an adjustment.

“The landscape involving criminal jurisdiction in Oklahoma has drastically changed,” said Rebecca Day, assistant special agent in charge of criminal matters in Oklahoma City. “The FBI is now responsible for responding to and investigating crimes that one year ago were handled by state and local law enforcement.”

The case that set off the changes, McGirt v. Oklahoma, concerned Jimcy McGirt, a member of the Seminole Nation who was convicted of sex crimes against a child on Creek land. McGirt appealed his conviction, arguing that the state lacked jurisdiction and that he should be retried in federal court. The Supreme Court agreed in a 5-4 ruling last July. Now, the FBI and federal prosecutors are racing to build federal cases against convicted criminals who might try to appeal on similar grounds.

‘A Lot of Moving Parts’

The Indian Country case load is made up of newly initiated cases, state cases that were in the criminal process but not yet fully adjudicated, and appealed cases by currently incarcerated prisoners who are filing motions to have their convictions dismissed based on the lack of state jurisdiction. Now, the FBI and federal prosecutors are racing to obtain warrants to keep criminals behind bars. “This poses new challenges for us because of statutes of limitations, stale evidence, and deceased witnesses,” said Godbold.

“There is a fear the wrong person will get out of jail and do something horrific before we are able to get them into custody.”

The FBI set up a special intake center to manage the volume and triage the administrative work, which has freed up agents to work the cases. “It is a constant scramble,” Day said, describing the accelerated process of writing complaint affidavits, meeting with magistrates, and transporting prisoners from 17 state prison facilities into the custody of U.S. Marshals. The task is so daunting at every federal level that the U.S. Department of Justice is seeking more money in the coming fiscal year to support efforts in Oklahoma, including an additional $33 million for the state’s three U.S. Attorney’s offices, about $26 million more for the FBI, and nearly $9 million for the U.S. Marshals.

“There are definitely a lot of moving parts,” Day said. “Anyone working Indian Country in Oklahoma would tell you there is a fear the wrong person will get out of jail and do something horrific before we are able to get them into custody.”

Ensuring crime victims get access to federal resources and support falls largely on the FBI’s Victim Services Division. The division was created two decades ago to assist victims in FBI cases. It manages victim specialists in all of the Bureau’s field offices and surged resources and team members to support the work in Oklahoma, where the re-opening of years-old cases could be unsettling for victims who have tried to move on.

“People are definitely experiencing a little bit of trauma response from having to relive their case or having to prepare themselves for the possibility of having to go through the prosecution process again,” said Kim Weems, a victim specialist in the Oklahoma City Field Office. “We have a lot of people in our homicide cases, families who are having to relive that grief and revisit things that they really thought that they had dealt with previously. So, it’s definitely tearing that scab off old wounds.”

The gravity of the criminal cases and the staggering volume places an added sense of urgency onto every case for everyone involved. Agents, intelligence analysts, and other professional staff from each of the Bureau’s 56 field offices are putting in long days, seven days a week, acknowledging there’s no room for error or complacency given the types of crimes that are involved.

“People are definitely experiencing a little bit of trauma response from having to relive their case or having to prepare themselves for the possibility of having to go through the prosecution process again.”

“You never want to say no, and you never want to make a family feel as if their case isn’t your top priority or important,” said Rachel Murdock, one of 16 full-time child/adolescent forensic interviewers for the FBI who has been working in Oklahoma. “It’s just been challenging to triage because everything feels urgent and important.”

Godbold said that the sheer volume of cases has compelled her and federal prosecutors to make difficult decisions about which cases must get priority and which ones have to wait. Not surprisingly, it’s the violent crimes—past and present—that get the most immediate attention.

“We have made that hard call,” Godbold said. “I am comfortable with that call because, frankly, I don’t know how you delineate what you’re going to prosecute and what you’re not. What rapes are we not going to prosecute? What child molestations are we not going to work? The thought of winnowing that down even further is just simply not possible in my mind or in those of the U.S. Attorney’s offices.”

The FBI has launched the Beacon Project, a program designed to create mutually beneficial relationships between the Bureau and Historically Black Colleges and Universities.