Part 2: An Explosive Situation in the Dead of Winter 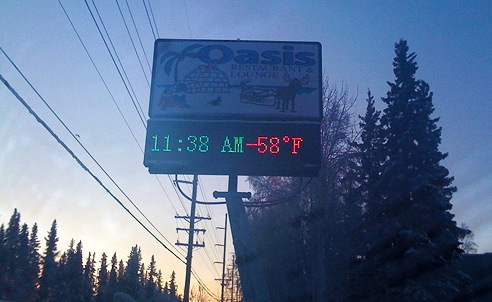 The elements can present special challenges for investigators—in this case, bomb technicians.

The call came in to the Anchorage Field Office early on a Sunday morning in January 2010. An explosion had taken place at a Fairbanks residence, and a 21-year-old man had been seriously injured.

After consulting with local authorities on the scene, our weapons of mass destruction (WMD) coordinator and other FBI personnel were not sure if the explosion was related to a drug manufacturing operation or linked to a terrorism threat. But everyone understood that our assistance was required, because the house contained a variety of hazardous, unstable materials.

Members of our Evidence Response Team (ERT), the Joint Terrorism Task Force (JTTF), and others from the Anchorage office gathered their equipment and prepared to drive to Fairbanks—365 miles to the north—in the middle of a violent winter storm.

“It was 58 degrees below zero, with high winds, blizzard conditions, and black ice on the highway,” said Special Agent Derek Espeland, the WMD coordinator who is also one of Anchorage’s two special agent bomb technicians.

Based on the description of materials in the house, agents initially thought the man was making methamphetamine—meth labs are an unfortunate reality in many rural communities. The victim, who walked to a nearby fire station despite the sub-zero temperature, was burned and bleeding. He claimed he was building a rocket when it blew up. Before he could be questioned further, he was flown to a burn unit in Seattle for treatment.

After a harrowing drive from Anchorage that took more than seven hours, FBI personnel arrived on scene along with bomb techs from the Air Force and local law enforcement. The meth lab theory was ruled out, “but then you almost had to conclude that the guy could be a terrorist,” Espeland said. “Everything we saw in the house we had seen being used by terrorists in Iraq and Afghanistan.”

As it turns out, the 21-year-old was neither a drug maker nor a terrorist. He was just fascinated with explosives and blowing things up. He had legally purchased all his ingredients—of course, our agents didn’t know that at the time. And because the house was a public safety threat, Espeland said, “we couldn’t just walk away.”

To neutralize the threat, it was decided to employ several render-safe techniques using specialized equipment. But that was easier said than done. Robots and other battery-powered equipment were inoperable in the nearly 60-below temperature because the batteries were frozen. Espeland’s evidence camera froze to his face when he tried to take a picture—inside the house. Vehicles had to be kept running for fear they would freeze if turned off, even with warming blankets and engine block heaters. An extension cord designed for extreme cold snapped and disintegrated.

“The cold was drier than anything I ever felt before,” said Vicky Grimes, an ERT member. “It almost took your breath away.”

A command post was established at the nearby fire station, and after a joint effort, the house was finally rendered safe. “Responding to this incident reinforced our understanding that we have to rely on our state and local partners for assistance, just as they rely on us,” said Special Agent Sandra Klein, Anchorage’s JTTF supervisor.

The 21-year-old recovered from his injuries, and—since he had committed no federal crimes—was not charged. “This was a public safety threat that could have been something far more serious,” Espeland said. “That’s why we responded, despite the conditions. That’s what we’re here for.”

Next: A domestic terrorist with a deadly plan.

With school back in session, one topic that’s on many class curriculums around the nation is cyber safety. After all, it’s a hyper-connected world—with texting, social networking, e-mail, online gaming, chat, music downloading, web surfing, and other forms of wired and wireless communication now a regular part of children’s lives.