Part 3: A Domestic Terrorist with a Deadly Plan 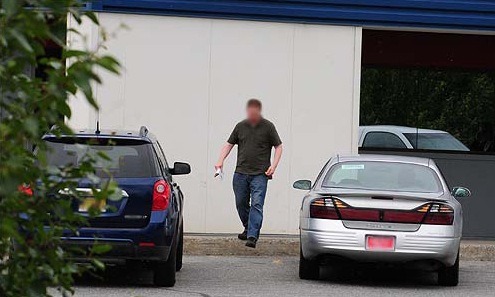 Paul Rockwood, seen here in a surveillance image, lived in the small fishing village of King Salmon. He had begun compiling a list of targets in the U.S. military he might assassinate in the name of jihad.

By the time he moved to Alaska in 2006, Paul Rockwood, Jr. was an ardent follower of the American-born radical cleric Anwar al-Awlaki, who he met at a Virginia mosque in late 2001.

Shortly after he settled with his family in the small fishing village of King Salmon to work for the National Weather Service, our agents in Anchorage were aware that Rockwood had begun compiling a list of targets in the U.S. military he might assassinate in the name of jihad.

“If you were wearing a U.S. military uniform,” said Special Agent Doug Klein, who worked the case from Anchorage, “as far as Rockwood was concerned, you were a target.”

A military veteran himself, Rockwood believed it was his religious duty to kill those who desecrated Islam. In 2009, he began sharing his deadly plans with an individual he thought held similar views. But that person was actually an undercover operative employed by our Joint Terrorism Task Force (JTTF) in Anchorage.

For a time, JTTF personnel wondered how determined Rockwood was about his plans. “But one day when he was with our undercover in Anchorage, he identified the building of a cleared defense contractor and said, ‘This is the kind of building I want to blow up,’ ” Klein said. “That’s when we knew he was a serious threat.”

Keeping track of Rockwood was difficult, however, because King Salmon is some 300 miles from Anchorage and only accessible by airplane. And with only a few hundred residents, outsiders would be immediately spotted, so attempts at surveillance were impractical. “We couldn’t use 90 percent of the traditional investigative techniques we use in the Lower 48,” Klein explained.

In addition, small, regional airlines in Alaska are not regulated by the Transportation Security Administration, so anyone can fly with weapons. On Rockwood’s frequent trips from King Salmon to Anchorage, Klein said, “he could have had a gun or a bomb and we never would have known.”

During those Anchorage visits, Rockwood met the undercover operative and discussed buying electronics and downloading schematics of cell phones to make bomb detonators. At one meeting, he said he was getting ready to relocate to the mainland and had plans to steal a cache of explosives in Boston—where he grew up—that would help him go operational.

By early 2010, Rockwood had formalized his hit list to include 15 specific targets—all outside Alaska—and he gave the list to his wife, Nadia, who was aware of his intentions.

Even with no overt acts of terrorism to charge him with, it was decided that for the sake of public safety, Rockwood and his wife could not be allowed to leave Alaska. In May 2010, JTTF agents questioned Rockwood and his wife as they attempted to fly out of Anchorage. Both denied any involvement with a hit list or terrorist plot.

The couple was charged with making false statements to the FBI in a domestic terrorism investigation, and in July, Rockwood was found guilty and sentenced to eight years in prison—the maximum sentence under the law. His wife was also found guilty and received five years of probation.

“We can never be sure if he would have acted,” Klein said, “but Rockwood was clearly a threat, not only to the individuals on his list but to the entire community.”

Next: The shot that pierced the Alaska pipeline.

With its aging, affluent population, South Florida is ground zero for the multi-billion-dollar criminal industry of health care fraud. Few cases illustrate the depth of the problem—and our efforts to fight it—more than Operation Universal Money Fast.