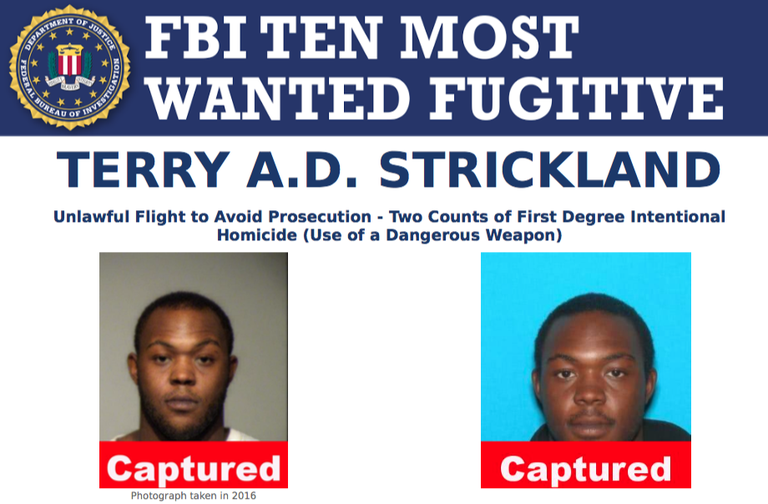 A Wisconsin man wanted for a double homicide is the newest addition to the FBI’s Ten Most Wanted Fugitives list, and a reward of up to $100,000 is being offered for information leading to his capture.

Terry A.D. Strickland, a 24-year-old Milwaukee resident, is charged with fatally shooting two men last July during a fight outside the house where he rented a room. After the murders, he fled the scene, abandoning his 18-month-old daughter.

“We don’t know all the details surrounding the shooting and what prompted it,” said Special Agent Chad Piontek, who is investigating the case from the FBI’s Milwaukee Division, “but we know that Strickland is extremely dangerous and he is a threat to the community.”

Milwaukee Police Department officers responded to multiple reports of a shooting on the afternoon of July 17, 2016. The bodies of two men—ages 38 and 39—were found outside the residence where Strickland appeared to be living with his daughter.

According to witnesses, a group of approximately seven or eight men were in front of the residence arguing. Strickland entered the house and allegedly returned with a .40-caliber handgun and began shooting into the group. One man who attempted to stop the argument ended up on the ground, and Strickland reportedly stood over the unarmed victim and shot him repeatedly before turning and shooting another unarmed victim in the head. After the shooting, Strickland fled, leaving his daughter behind in the residence.

Strickland is 6 feet 2 inches tall, weighs approximately 240 pounds, and has black hair and brown eyes. He has no known scars or tattoos. The fugitive has ties to Wisconsin, Illinois, and Indiana and is not known to have traveled outside the United States.

“The most recent information we have is that he might be in a Chicago suburb,” Piontek said, noting that the murder weapon was not recovered and it is likely that Strickland is armed.

Strickland is the 512th person to be placed on the FBI’s Ten Most Wanted Fugitives list, which was established in 1950. Since then, 479 fugitives have been apprehended or located—and 159 of them were captured or located as a result of citizen cooperation.

“We are asking for the public’s assistance to help us locate and apprehend Strickland before he hurts anyone else. There is no question that he is a danger to the community.”

A man who stole proprietary corn seeds containing the valuable trade secrets of U.S. companies DuPont Pioneer and Monsanto to send to his employer, a Chinese corn seed company, was sentenced in Iowa.

The FBI will host a live Twitter chat beginning at 3 p.m. EST today about the dangers of scams and about how to protect yourself this holiday season and all year long.