Help Us Capture a Murderer 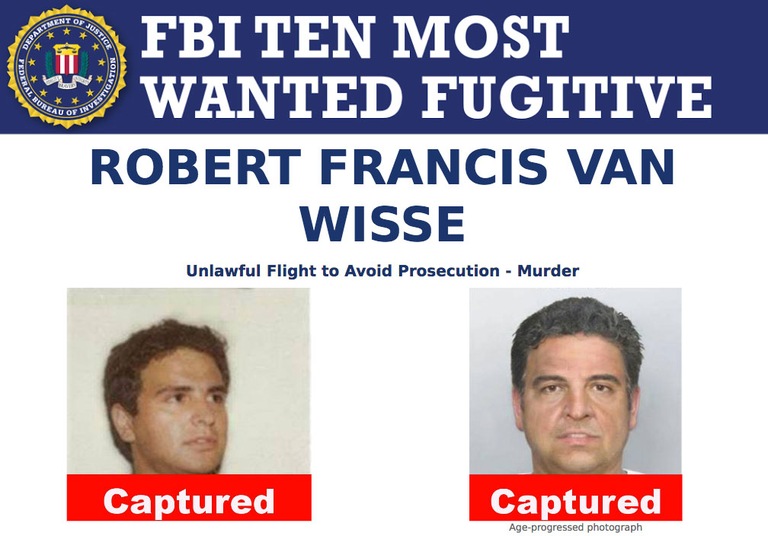 A Texas man charged with the strangulation murder of a 22-year-old woman in 1983 has been named to the FBI’s Ten Most Wanted Fugitives list, and a reward of up to $100,000 is being offered for information leading to his capture.

Robert Francis Van Wisse, a 19-year-old college student at the time of the murder, is now 51 years old and has been on the run for more than two decades. “No matter how much time has passed,” said Special Agent Justin Noble, a member of the FBI’s Central Texas Violent Crimes Task Force in Austin who is investigating the case, “it’s important that we finally get justice for the victim and her family.”

The victim, married with a 1-year-old daughter, worked as a janitor at the University of Texas at Austin. On the September night of the murder, Van Wisse was in the building late registering for a course.

The victim’s body was found in a restroom the next morning. An autopsy revealed that she had been sexually assaulted and strangled with a wire. Investigators determined that Van Wisse was the last person seen in the building before the murder. “He was initially ruled out as a suspect,” Noble explained, “because DNA and other tests were not as sophisticated then as they are today.”

The case went cold for a decade, until the early 1990s, when an Austin Police Department detective submitted crime scene evidence for new DNA tests—tests that took advantage of the latest technology. “The results pointed directly to Van Wisse,” Noble said.

When Van Wisse learned that he was being evaluated again as a suspect, he fled. In 1996, Texas charged the fugitive with capital murder, and the following year he was charged federally with unlawful flight to avoid prosecution.

“He was a college student whose parents were both professionals,” Noble said. “He grew up going to the best schools and living in the nicest neighborhood. He had the future in front of him,” Noble added, “and yet it appears he murdered a young woman making minimum wage trying to support her family and young child.”

When Noble read the original arrest affidavit, he believed the killer had acted impulsively. “But after studying the crime scene reports and autopsy,” he said, “the evidence clearly suggests that this was a premeditated act.”

“We need to catch this guy. The victim and her family deserve nothing less.”

Noble noted that Van Wisse’s family owns multiple properties in Mexico and in Guatemala. “He’s a smart guy and he’s bilingual,” Noble said of the fugitive. “He could be anywhere.”

At a press conference held today at the federal courthouse in Austin, authorities said the publicity effort to capture Van Wisse will include a social media advertising campaign targeted to specific locations in the U.S. and abroad. “We have also identified more than 30 individuals who have had close ties to Van Wisse,” Noble said, “and we are going to be in contact with all of them. Somebody knows something, and $100,000 is a lot of money.” Noble stressed that anyone providing information to the FBI can remain anonymous.

“We need to catch this guy,” he said. “The victim and her family deserve nothing less. It doesn’t matter that the murder took place more than three decades ago—to the victim’s family, it was like it was yesterday.”

If you have information regarding Van Wisse, contact your local FBI office or the nearest U.S. Embassy or Consulate, or submit a tip on our website.

The FBI will host a live Twitter chat beginning at 3 p.m. EST today about the dangers of scams and about how to protect yourself this holiday season and all year long.