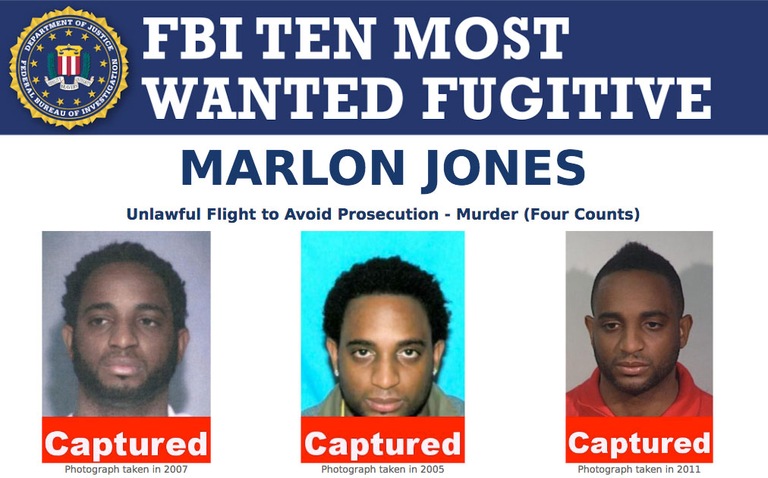 A Jamaican man charged with murdering four people during a bloody gun battle in a Los Angeles suburb has been named to the FBI’s Ten Most Wanted Fugitives list, and a reward of up to $100,000 is being offered for information leading to his capture.

Marlon Jones is wanted in connection with the early-morning shootout that occurred on October 15, 2016 in a home being used as a restaurant. In addition to the murders, 10 individuals were wounded.

“It appears Jones was part of an East Coast Jamaican criminal group involved in the illegal distribution of marijuana, and his crew was in Los Angeles trying to settle a dispute with a rival Jamaican crew,” said Special Agent Scott Garriola, a member of the FBI’s Los Angeles Fugitives Task Force.

Because the crime happened so recently, Garriola said, “it is still very early in the investigation. We are not sure if the crews were business associates or if their dispute was over territory.”

There are also unanswered questions about Jones himself, who is believed to have been born in Jamaica and has a long criminal record in which he has used multiple names and dates of birth. “The biggest challenge right now besides finding him,” Garriola explained, “is trying to figure out who he really is.”

He added, “We’re calling him Marlon Jones based on his criminal history in New York, but at this point it’s anyone’s guess what his actual birth name is. We don’t believe he is a U.S. citizen.”

Here is the information investigators currently have about Jones:

Because Jones operated predominantly on the East Coast, Garriola believes he has fled Los Angeles. Besides strong ties to New York and New Jersey, the fugitive also has connections in Connecticut, Tennessee, the Virgin Islands, and Jamaica.

“Based on the nature of this crime, he will be armed and extremely dangerous,” said Garriola, who has been involved in multiple Top Ten Fugitive investigations and believes the significant reward could make a difference in this case.

“Even for his associates involved in the narcotics business,” Garriola said, “$100,000 is still a lot of money.” Garriola also stressed that anyone providing information can remain anonymous. “Everything is confidential,” he said.

If you have information regarding Marlon Jones, please contact your local FBI office or the nearest U.S. Embassy or Consulate, or submit a tip on our website.

Jones is the 510th individual to be named to the FBI’s Ten Most Wanted Fugitives list. Since its creation in 1950, 478 of the fugitives named to the list have been apprehended or located—158 of them as a result of citizen cooperation.

The FBI is a critical component of the Joint Interagency Task Force South (JIATF-S), whose mission is to stem the flow of illegal drugs and to disrupt narco-trafficking networks operating on the high seas.

A former State Department employee working in Iraq was sentenced for using his authority to illegally steer $2 million in contracts for micro-dairies to his son's company.