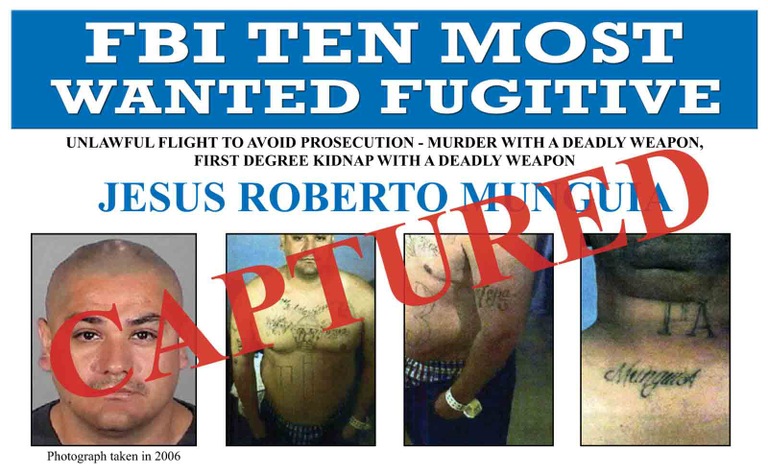 2/15/18 Update: Jesus Roberto Munguia was arrested early this morning without incident by Mexican authorities in Pajacuarán, Michoacán, Mexico, as a direct result of a citizen recognizing him from his wanted poster. Details

A convicted felon wanted for the brutal murder of his wife is the newest addition to the FBI’s Ten Most Wanted Fugitives list, and a reward of up to $100,000 is being offered for information leading to his capture.

Jesus Roberto Munguia, a known gang member with a violent criminal history, is charged with the July 2, 2008 kidnapping and murder of his wife in Las Vegas, Nevada.

“This was a vicious killing,” said Special Agent Andrew Attridge, who is investigating the case from the FBI’s Las Vegas Division. Munguia and his wife were estranged—each having accused the other of infidelity. When Munguia threatened to kill his wife and their four children, ages 6 through 12, she left their Las Vegas home with the children.

“A few nights later he convinced her to come home,” Attridge said. When she did, Munguia locked the kids in the bedroom and forced his wife into her car. He drove her to an unknown location, where he bound her hands with seatbelts and used jumper cables to tie her neck to the car seat’s headrest. “At some point,” Attridge said, “he beat her to death with a blunt object, possibly the handle of a tire jack.”

After the murder, Munguia drove back to his house, parked the car in the driveway, and fled. The victim’s sister found the body in the car, bound and beaten.

Munguia was charged in Nevada with kidnap and murder with a deadly weapon on July 3, 2008. Soon after, he was charged federally with unlawful flight to avoid prosecution.

At the time of the murder, Munguia was 31 years old. Born and raised in Los Angeles, he is a known member of the Southern California gang TEPA 13 and has an extensive criminal record, Attridge said, including several counts of car theft, and assault with a deadly weapon on a police officer when he was 18 years old. Prior to the murder, there were several outstanding warrants for his arrest.

“We believe that Munguia will do anything to evade capture. He should be considered armed and extremely dangerous.”

“We believe Munguia continues to have extensive family ties and gang ties to Southern California,” Attridge said, especially in Los Angeles and Bakersfield. He may have also fled to Tijuana, Mexico, or deeper into Mexico.

Being named to the Ten Most Wanted Fugitives list means the reward for information leading to Munguia’s capture has increased to as much as $100,000. “We are hoping that will be a motivator for somebody to come forward,” Attridge said, adding that tipsters can remain anonymous.

Munguia has several distinguishing features that may help someone recognize him. He has a tattoo of a teardrop near his left eye, and a tattoo of the letters “PA” on the back of his neck. He is also missing his right index finger.

“We know he is a violent individual,” Attridge said, “and he also appears to be smart in terms of evading capture.” Munguia has been known to use his deceased brother’s identity to get jobs—using his real name could lead authorities to him because of the outstanding warrants for his arrest.

“We believe that Munguia will do anything to evade capture,” Attridge said. “He should be considered armed and extremely dangerous.” If you have information regarding Munguia, contact your local FBI office or the nearest U.S. Embassy or Consulate, or submit a tip online at https://tips.fbi.gov.

On the Crow Reservation in Montana, the FBI is working to solve the case of Robert Garrett Stewart, Jr., who disappeared without a trace four years ago.