Help Us Find a Rapist and Murderer 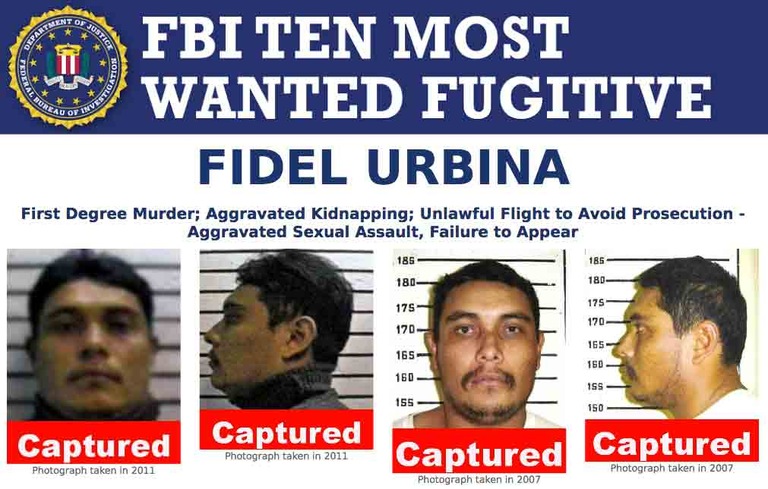 9/23/16 Update: Fidel Urbina was taken into custody in Mexico. Details

Fidel Urbina, the subject of a nationwide manhunt since 1999 in connection with two sexual assaults and murder, has been named to the Ten Most Wanted Fugitives list.

The former Chicago resident is wanted for allegedly beating and raping a woman in March 1998, and—seven months later, while free on bond—for beating, raping, and strangling a second Chicago woman to death. That woman’s body was found in the trunk of a burned-out car.

“Fidel Urbina is wanted for his role in two brutal attacks directed against innocent victims,” said Robert Grant, special agent in charge of our Chicago office. “These crimes have demonstrated his violent nature and the need to locate and apprehend him before he can strike again. We are hoping that the publicity associated with this case, along with the significant reward being offered, will lead to his arrest.”

We are offering a reward of up to $100,000 for information leading directly to Urbina’s arrest. The fugitive, who is now 37 years old, is a Mexican national who is 6 feet tall and weighs approximately 170 pounds. He has black hair, brown eyes, and a noticeably pockmarked right cheek. He has been known to use numerous aliases, including the names Lorenzo Maes, Fernando Ramos, and Fidel Urbina Aquirre. Given the nature of the charges against him, Urbina should be considered armed and dangerous.

The search for Urbina is being coordinated by our Violent Crimes Task Force (VCTF) in Chicago, which includes FBI agents, detectives from the Chicago Police Department, and Cook County Sheriff’s Office investigators.

Special Agent Pablo Araya, fugitive coordinator for the VCTF, believes Urbina is hiding somewhere in Mexico. “Wherever he is,” Araya said, “my guess is that women are in danger there, because this guy has shown no remorse and isn’t likely to change his ways. That’s why we need to catch him.”

A federal arrest warrant was issued for Urbina in 1999, and in 2006 a provisional arrest warrant was signed by a federal magistrate in Mexico. But despite law enforcement’s best efforts—which have included the case being profiled nationally on America’s Most Wanted and locally on Chicago’s Most Wanted television shows—the fugitive remains at large.

We need your help. If you have any information about Fidel Urbina, please call the Chicago FBI at (312) 421-6700 or your nearest law enforcement agency or U.S. Embassy or Consulate. You can also submit a tip online.

“He’s been on the run for over 10 years,” Araya said. “He may be hiding in Mexico thinking that he is safe, but our hope is that because of the Top Ten publicity, someone who knows him or who recognizes his picture will think about that $100,000 reward and give us a call.”

Urbina is the 497th person to be placed on the FBI’s Ten Most Wanted Fugitives list. Since its creation in 1950, 466 fugitives on the list have been apprehended or located—154 of them as a result of citizen cooperation.

Snow swirled in New Mexico’s high plains as Special Agent Mac McCaskill slowed his vehicle at the bottom of a hill on the Tohajiilee Reservation. He engaged the four-wheel drive before continuing slowly up the steep, bumpy track on his way to deliver a subpoena in a violent assault case.

FBI.gov recently visited New Mexico for a firsthand look at how the Bureau and our partners fight crime on tribal lands. This is the first in a series of stories.