Help Us Find a Violent Criminal 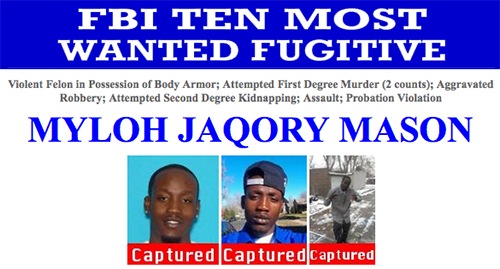 Update: Myloh Mason has been taken into custody without incident.

Myloh Jaqory Mason—wanted for a series of violent crimes, including attempted murder—has been named to the Ten Most Wanted Fugitives list.

A reward of up to $100,000 is being offered for information leading directly to the arrest of the 25-year-old fugitive, who is being sought on federal and state charges for his alleged involvement in recent violent bank robberies and two separate shootings in Lakewood, Colorado.

“Myloh Mason is a very violent felon. It’s important for the safety of the community that we apprehend him as soon as possible,” said Special Agent Russ Humphrey, fugitive coordinator for the FBI Denver Field Office’s Rocky Mountain Safe Streets Task Force.

Along with two accomplices—who are in custody—Mason is believed to have robbed at least two Lakewood banks within the last four months, and his tactics have become more aggressive. The first robbery took place on September 30, 2015. Mason and two others wearing costumes allegedly shoved guns in the faces of bank employees and said the tellers would be killed unless they opened the bank vault.

The crew struck again in November. Mason and two others allegedly wore green and white skeleton masks when they staged a takeover robbery, shoving guns in the faces of tellers to gain access to the vault. During that robbery, Mason—a convicted felon—was wearing a ballistic vest. Pursued by police after fleeing the bank, Mason and his partners shot two innocent citizens during a home invasion and a carjacking.

“The robbers clearly seemed desperate,” Humphrey said. “It was lucky that the two injured civilians, one of whom was shot four times, weren’t killed.” He added that the scenes played out near schools—which were locked down for hours—and a community recreation center frequented by parents with young children.

“We do not accept this kind of ruthless violence in our communities,” Humphrey said. “Adding Mason to the Ten Most Wanted Fugitives list is an indication of how serious we are about apprehending him.”

Mason is 6-foot-2 and weighs approximately 155 pounds. He has black hair, brown eyes, and tattoos on his chest, both arms, and hands. He has ties to Colorado, Florida, and Nevada. Investigators say that he uses a variety of aliases and caution that he should be considered armed and extremely dangerous.

“Mason and his gang have committed some of the most violent bank robberies we’ve seen in Colorado,” said Thomas Ravenelle, special agent in charge of the FBI’s Denver Division. “We believe he’s not going to stop and is a real danger to the community.” Ravenelle urged the public to help the FBI catch Mason and noted the substantial reward for cooperation.

If you have any information concerning the whereabouts of Mason, please call the FBI at 1-800-CALL-FBI (225-5324), or contact your nearest FBI office, law enforcement agency, or U.S. Embassy or Consulate. You can also submit a tip online.

Mason is the 505th person to be placed on the FBI’s Ten Most Wanted Fugitives list, which was established in 1950. Since then, 473 fugitives have been apprehended or located, 156 of them as a result of citizen cooperation.