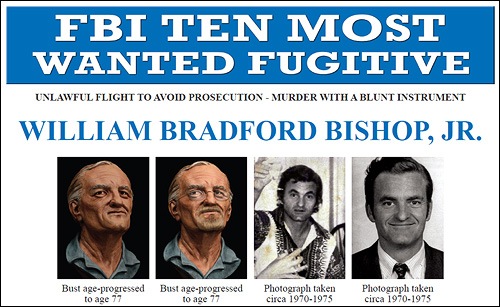 William Bradford Bishop, Jr., wanted for the brutal murders of his wife, mother, and three sons in Maryland nearly four decades ago, has been named to the Ten Most Wanted Fugitives list.

A reward of up to $100,000 is being offered for information leading directly to the arrest of Bishop, a highly intelligent former U.S. Department of State employee who investigators believe may be hiding in plain sight.

On March 1, 1976, Bishop used a hammer to bludgeon his family, including his three boys, ages 5, 10, and 14. Investigators believe he then drove to North Carolina with the bodies in the family station wagon, buried them in a shallow grave, and set them on fire. The last confirmed sighting of Bishop was one day after the murders at a sporting goods store in Jacksonville, North Carolina, where he bought a pair of sneakers.

“Nothing has changed since March 2, 1976 when Bishop was last seen except the passage of time,” said Steve Vogt, special agent in charge of our Baltimore Division. Vogt has teamed with local Maryland law enforcement officials to apprehend Bishop, a man described by investigators as a “family annihilator.”

“There is no indication that Bishop is dead,” Vogt said, explaining that the area where the bodies were discovered was searched extensively, and hundreds of individuals were interviewed at the park where the abandoned station wagon was later discovered—there was no trace of Bishop.

The FBI, the Montgomery County Police Department, the Montgomery County Sheriff’s Office, and the Department of State formed a task force last year to take another look at the Bishop case and to engage the public in locating him. As part of that effort, a forensic artist created a three-dimensional, age-enhanced bust of what the fugitive may look like now, at the age of 77.

Naming Bishop to the Top Ten list is expected to bring national and international attention to the case in a way that was impossible decades ago. “When Bishop took off in 1976, there was no social media, no 24-hour news cycle,” Vogt said. “There was no sustained way to get his face out there like there is today. And the only way to catch this guy is through the public.”

“If Bishop is alive—and there is every chance that he could be,” said Tom Manger, chief of the Montgomery County Police Department and a member of the task force, “we are hopeful someone will call with the tip we need to catch him.” Manger added, “When you have a crime of this magnitude, no matter how long ago it occurred, the police department and the community never stop trying to bring the person responsible to justice.”

“No lead or tip is insignificant,” Vogt explained. “If Bishop is living with a new identity, he’s got to be somebody’s next-door neighbor.” Vogt, a Maryland native who remembers when the murders happened 38 years ago, echoed Manger’s sentiments about never giving up trying to locate the fugitive. “Don’t forget that five people were murdered,” he said. “Bishop needs to be held accountable for that.”

We need your help: If you have any information concerning William Bradford Bishop, Jr., contact your local FBI office, the nearest law enforcement agency, or the appropriate U.S. Embassy or Consulate. You can also submit a tip online.

Although William Bradford Bishop, Jr. traveled extensively overseas through his job with the U.S. Department of State and spoke several foreign languages, investigators believe he may have assumed a new identity and be hiding in plain sight in the United States.

Even an experienced traveler might find it difficult to maintain a new identity in a foreign country, said Steve Vogt, special agent in charge of our Baltimore Division. “If you’re a U.S. citizen it’s usually easier to hide in this country,” he explained. “Americans overseas tend to stand out.”

“The reality is, he could be anywhere,” Vogt added. “But we don’t want people to assume that he’s out of the country and overlook the fact that he might be living in their community. People might see someone who looks like him and think, ‘It couldn’t be him.’ Well, it could be him,” Vogt said. “That’s why we need the public’s help.”

Vogt doesn’t dismiss the possibility that Bishop died years ago, but currently there is no proof either way. “If he’s dead, so be it,” Vogt said, “but until we know for certain, we will not stop searching for him.”

In 1976, Steve Vogt, special agent in charge of our Baltimore Division, was an 11-year-old living not far from where the Bishop murders occurred in Bethesda, Maryland. “I’ve known this case my whole life,” he said. “The murders received a lot of press attention back then. I think it’s a mystery that has always haunted me.”

The Montgomery County sheriff and the county’s police chief also grew up in the area, and both were receptive when Vogt called and suggested forming a task force to renew efforts to locate Bishop through a publicity campaign—efforts that ultimately led to Bishop being named to the FBI’s well-known Ten Most Wanted Fugitives list.

Montgomery County Police Department Chief Tom Manger, who was born and raised in Baltimore, was a senior criminal justice major at the University of Maryland in 1976 when the murders took place. Like Vogt, he remembers being shocked by the brutality of the crime and intrigued by the facts—and the mystery—of the case.

“When Steve called, I was very supportive of his efforts to add Bishop to the Top Ten list,” Manger said. “The media exposure after all these years could greatly increase our chances of finding him.”

Manger and Vogt point to the successful capture of James “Whitey” Bulger, a Top Ten fugitive for 16 years before his capture at the age of 81—thanks to an FBI publicity campaign.

“All it will take is for one person who recognizes Bishop to pick up the phone and call us,” Vogt said. “Then justice can be served.”

How an FBI psychologist helps investigators and victims in hostage cases.