To Catch a Fugitive 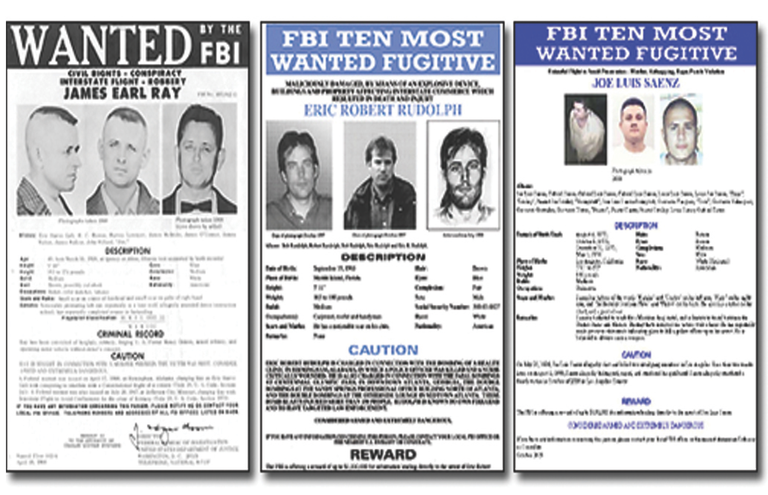 Now, thanks to a recent redesign of the FBI.gov Most Wanted section, the public has more tools to help us close cases of suspected murderers, terrorists, bank robbers, and kidnapped and missing individuals.

For the first time, web visitors can go beyond just scanning pages of mug shots—and use search criteria like location, gender, crime type, reward, and even ZIP Codes to help narrow and focus their searches. For example, you can search for fugitives wanted for murder in California. Bear in mind, we have about 600 open cases featured on the website, and cases are removed soon after they are solved. 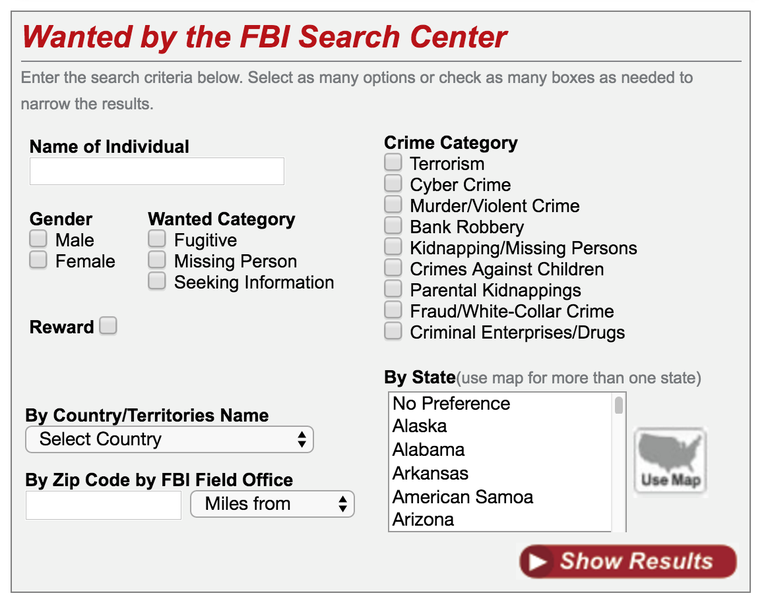 Search for fugitives and missing persons.

“Tips and leads from the public are crucial in fugitive investigations,” said Special Agent Bradley Bryant, who works with local law enforcement agencies on cold cases through our Violent Crime Apprehension Program, or ViCAP. The program posts images, sketches, and profiles of individuals and their cases in hopes the public may be able to provide tips to aid investigations.

The web redesign also features a new blue profile box for each fugitive or missing person, which you can click through quickly for summaries, descriptions, aliases, photos, and more. Each profile also contains a link to the traditional poster that can be shared and printed—with printable pdfs now available for each poster.

The profiles are now organized into three main sections: wanted fugitives, missing persons, and seeking information. For the first time, the Wanted site also contains links to the fugitives of other federal agencies—such as the U.S. Secret Service and the Drug Enforcement Administration. 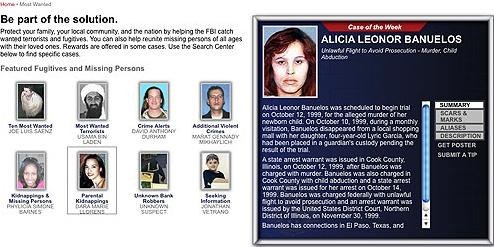 The Most Wanted page includes a Case of the Week and profiles from more than 600 open cases.

Not all FBI fugitives are included in the Most Wanted section. Many bank robbers, for example, are publicized through local Bureau press releases or through various state or local websites. See our Bank Robbery webpage for a list of those sites and additional information.

Early on, our fugitive posters were commonplace in federal buildings, most notably in post offices where the mug shots and rewards were as reliably present as stamp machines. In the mid-‘90s, as the public’s attention turned to the burgeoning Internet, FBI wanted posters followed suit. The Ten Most Wanted Fugitives list went online in 1996 with the advent of the FBI website. New categories appeared shortly thereafter, including the addition of the Most Wanted Terrorists list in 2001.

“We've come a long way from the days of distributing wanted posters,” Bryant said. “We now routinely use not only the Internet, but television programs, digital billboards, and social media such as Facebook, Twitter, and YouTube to publicize wanted persons.”

To date, 56 cases have been solved as a direct result of website publicity, according to the Investigative Publicity and Public Affairs Unit, which runs the Most Wanted section. With the evolution of FBI.gov and the Most Wanted section's new search features, we hope the public will help us even more as we move forward.

“The searchable database on our website,” Special Agent Bryant says, “is in keeping with our continuing push for new and better ways to engage the public in our investigations.”