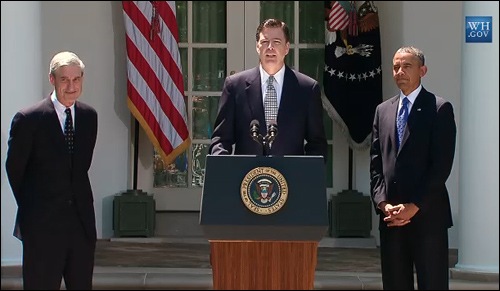 James Comey speaks at the White House following his nomination by President Barack Obama to be the next Director of the FBI when Director Robert S. Mueller’s term ends on September 4.

President Barack Obama today nominated James B. Comey to serve as the next Director of the FBI. Comey must be confirmed by the U.S. Senate before taking office.

“Jim is exceptionally qualified to handle the full range of challenges faced by today’s FBI,” the president said during a ceremony held at the White House. “I am confident that Jim will be a leader who understands how to keep America safe and to stay true to our founding ideals no matter what the future may bring.”

“I want to commend the president for the choice of Jim Comey as the next Director of the FBI,” said current Director Robert S. Mueller. “I have had the opportunity to work with Jim for a number of years at the Department of Justice, and I have found him to be a man of honesty, dedication, and integrity. His experience, his judgment, and his strong sense of duty will benefit not only the Bureau but the country as a whole.”

Comey served as deputy attorney general under the George W. Bush administration from December 2003 until August 2005, running the day-to-day operations of the Department of Justice. Prior to that, he was 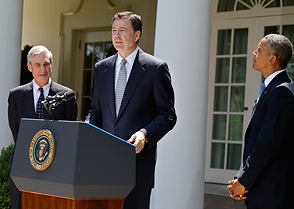 U.S. attorney for the Southern District of New York, where he prosecuted a number of major terrorism and criminal cases. From 1996 to 2001, Comey worked in the U.S. Attorney’s Office for the Eastern District of Virginia. He has extensive industry experience as well, serving as general counsel and senior vice president for Lockheed Martin and general counsel for the investment firm Bridgewater Associates.

“Just as important as Jim’s extraordinary experience is his character,” President Obama said. “Jim understands that in times of crisis, we aren’t judged solely by how many plots we disrupt or how many criminals we bring to justice—we are also judged by our commitment to the Constitution that we’ve sworn to defend and to the values and civil liberties that we’ve pledged to protect.”

Mueller steps down September 4 after serving 12 years—his original 10-year term plus a two-year extension proposed by the White House and approved by Congress in 2011. “I want to take this opportunity to thank the men and women of the FBI,” Mueller said. “Through their hard work, their dedication, and their adaptability, the FBI is better able to predict and prevent terrorism and crime.”

If his nomination is confirmed, Comey will be the 11th Director in the FBI’s 105-year history—the 7th since the J. Edgar Hoover era. When it began in 1908, the Bureau’s leader was called “Chief.” Since 1919, the organization’s top administrator has been called “Director.” The Director has answered directly to the attorney general since the 1920s and by law is appointed by the president and confirmed by the Senate. In 1976, in reaction to the extraordinary 48-year term of Hoover, Congress passed a law limiting the FBI Director to a single term of no longer than 10 years.

How police and the FBI unraveled a bomb plot targeting one of the nation's largest retailers.