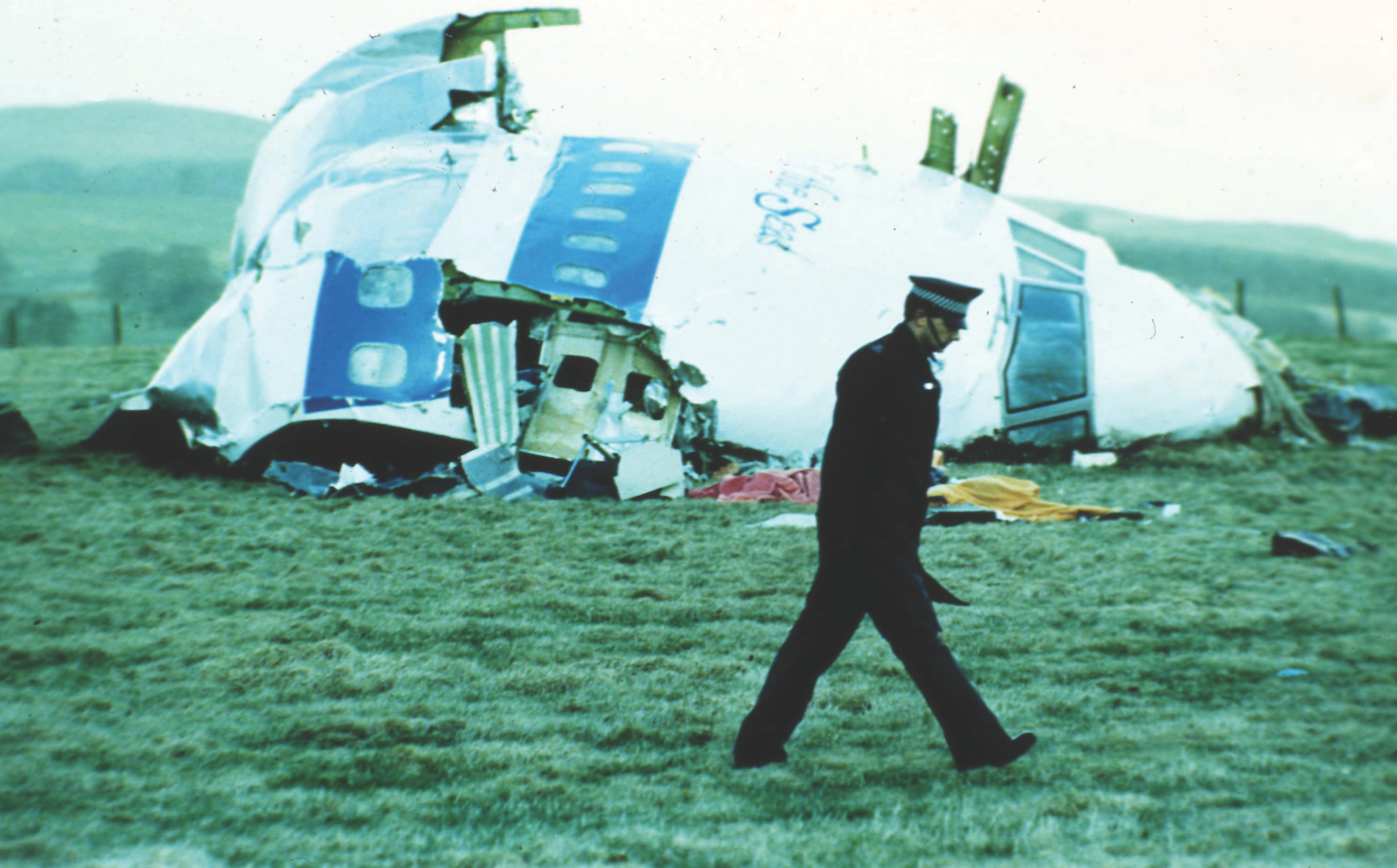 Thirty-two years to the day after the terrorist bombing of a Pan Am jet over Scotland killed 270 people, including 190 Americans and 11 residents in the town of Lockerbie, federal investigators today announced charges against a Libyan man they say was involved in making the bomb.

The investigation has been open for more than three decades, even after a Libyan intelligence officer was convicted in 2001 on 270 counts of murder in the case in a Scottish court. The FBI, working closely with authorities in Scotland, has continued to pursue leads over the years pointing to others that may have been involved in the attack.

In a press conference this morning in Washington, D.C., federal officials announced the criminal complaint against Abu Agela Mas’ud Kheir Al-Marimi for his alleged role in the attack. He is currently in prison in Libya.

The charges are the result of hundreds of interviews and leads that took investigators to 16 countries to pore over decades-old evidence. The investigation has relied heavily on foreign partners, many in Scotland, where remnants of the plane fell, creating an 845-square-mile crime scene.

“Without the thoroughness and professionalism of our FBI personnel, the Department of Justice, our Scottish partners, and the people of Lockerbie, we never would have found the trail that led us to the men responsible for this attack,” said FBI Director Christopher Wray. “We will never forget the loved ones who were lost, and we remain committed to continuing our work to achieve justice for the victims and their families.”

The December 21, 1988 bombing, along with the ensuing investigation and the trial of two suspects in 2000, have played pivotal roles in how the FBI works on international cases and how it serves victims of crimes. The Bureau’s work with investigators in Scotland helped create a template for how the FBI handles international investigations. And the Bureau’s Victim Services Division is modeled largely on the extraordinary compassion Lockerbie residents showed to victims’ families in the delicate care they took to preserve and return personal effects collected during the early days and weeks of the investigation.

Attorney General William Barr said during the Monday press conference that while the bombing occurred more than three decades ago, it left a lasting impression on anyone old enough to remember it.

“For those of us who do remember, that tragic event and the iconic images of its aftermath, some of which are displayed here today, are forever seared in our memories,” Barr said. 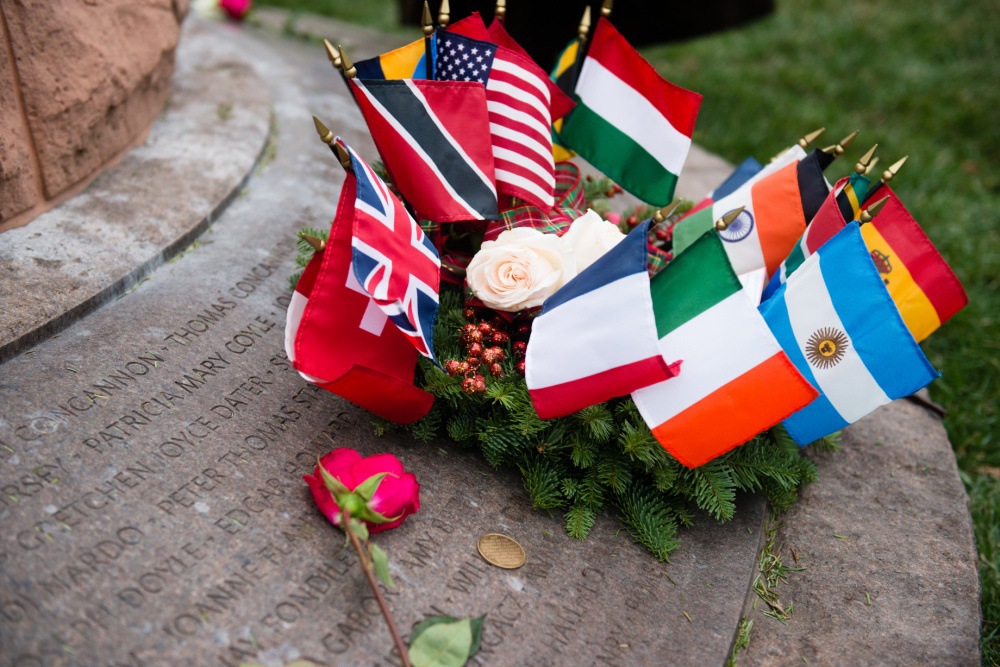 At Arlington National Cemetery in Virginia, a memorial cairn constructed of 270 stones—one for each of the victims of Pan Am Flight 103 who came from 21 different countries—is the sight of an annual service on the anniversary of the disaster, December 21. 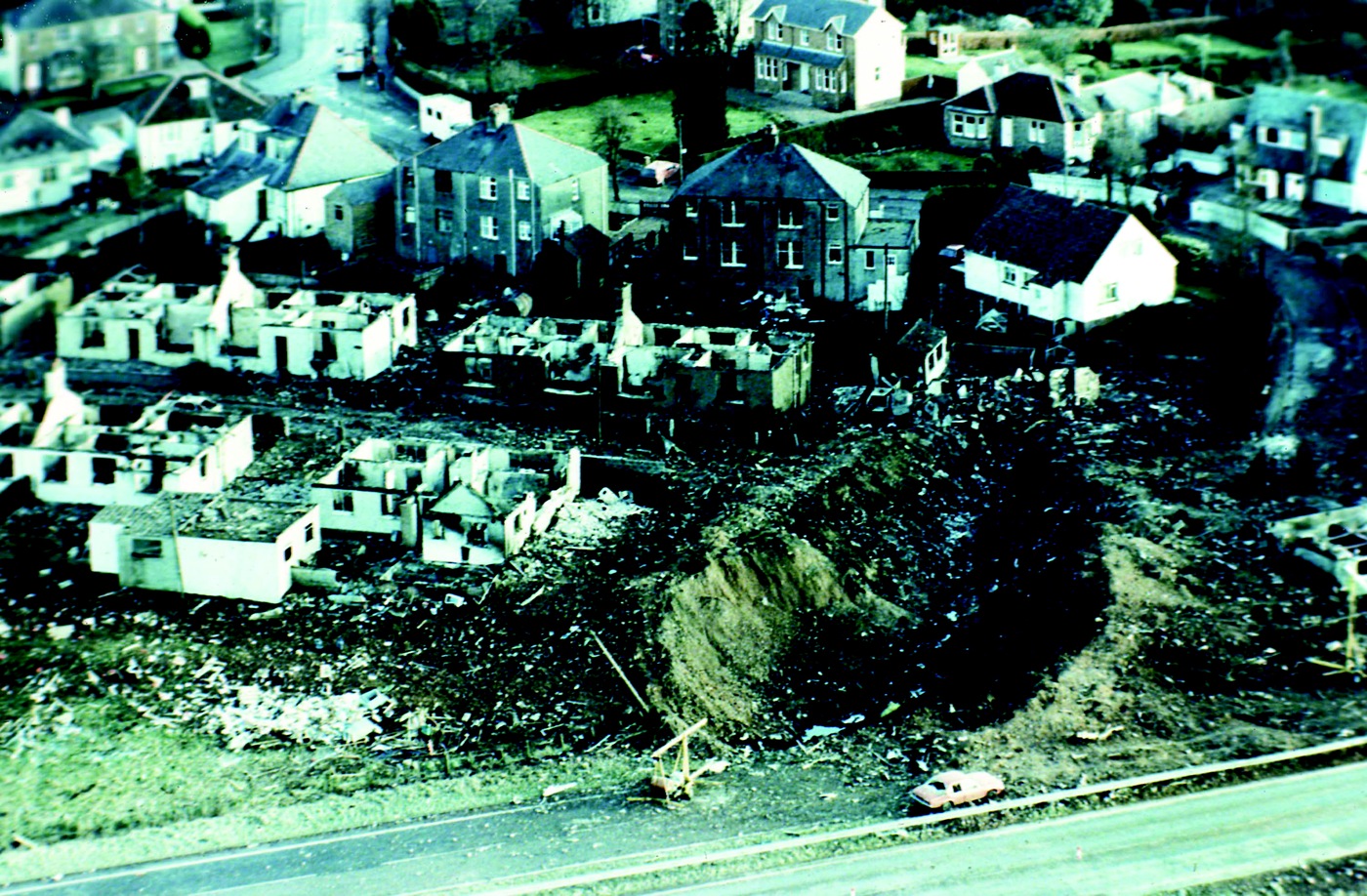 The plane’s wings, along with tanks carrying 100 tons of jet fuel, crashed into the Sherwood Crescent neighborhood in Lockerbie, creating an inferno and a crater more than 150 feet deep. Eleven residents were killed instantly. (AP photo)

In 1991, the British and American governments charged Abdel Basset Ali al-Megrahi and Lamen Khalifa Fhimah in the case. Their trial in 2000 was held in Scottish court built for the occasion on a former U.S. military base in the Netherlands. The court acquitted Fhimah and convicted al-Megrahi in 2001, sentencing him to life in prison. He was released in 2009 when he was believed near death from cancer, but he survived almost three more years. 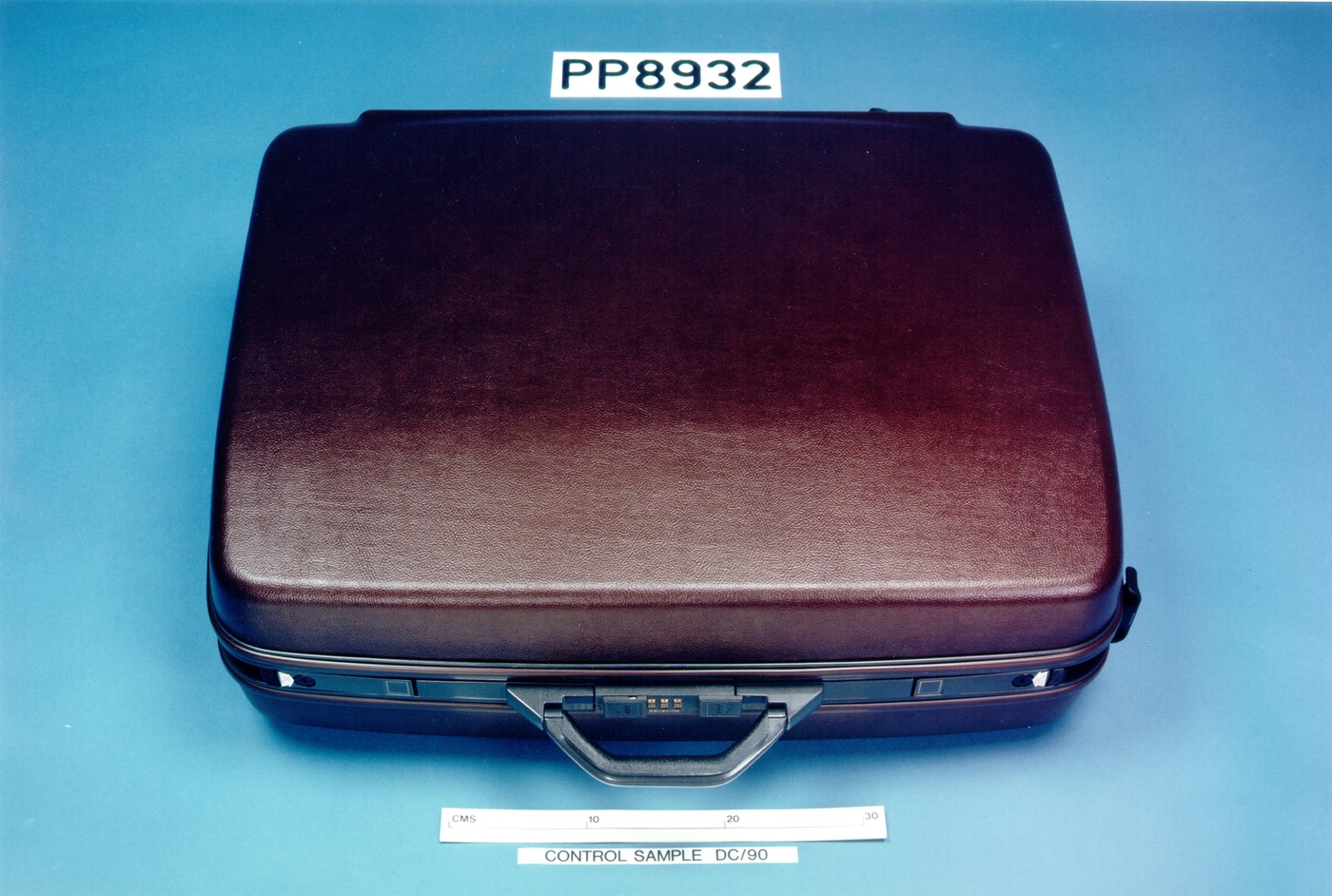 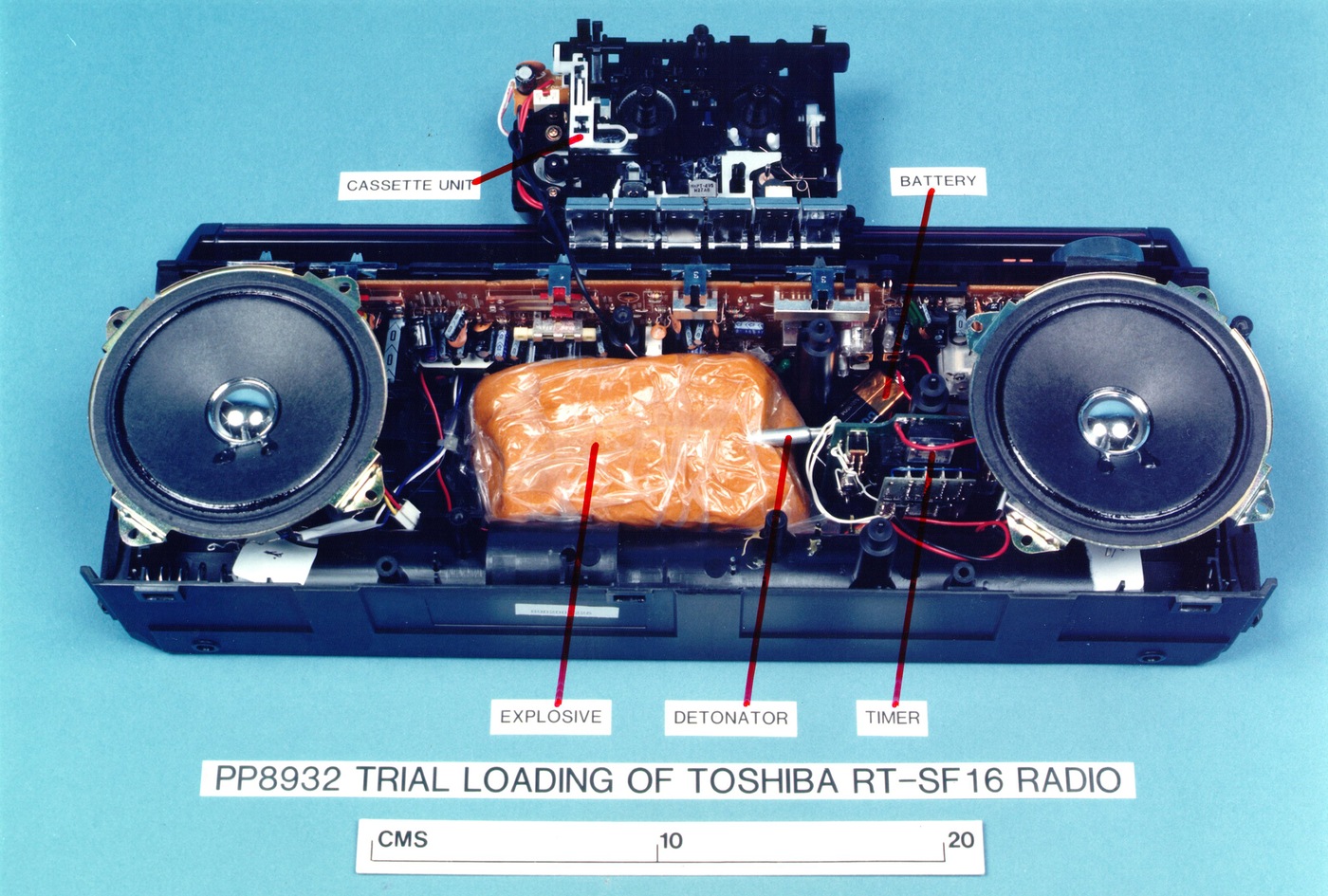 Key pieces of evidence led investigators in 1991 to two Libyan intelligence officers who were part of the terrorist plot. Evidence presented at their trial in 2000 included a replica of the suitcase that contained the bomb, a reproduction of the plastic explosive placed inside a cassette recorder, and a recovered clothing fragment traced to a shop in Malta.

The new charges allege Libyan national Abu Agela Mas’ud Kheir Al-Marimi played a role in making the bomb that exploded over Lockerbie in 1988.

The charges unsealed this week are the first in the case since 1991. Over more than three decades, victims’ families have continued to push to advance the investigation, believing the plot and its execution were not limited to Fhimah and al-Megrahi. Agents in the Washington Field Office, which has been leading the FBI investigation since the outset, have made repeated trips to countries with a nexus to the plot. And in private briefings, FBI officials have steadfastly assured victims’ families the investigation remains robust and ongoing. Every year, for example, FBI and Scottish investigators meet with Victims of Pan Am Flight 103, Inc. to brief any developments. The meeting is held during Remembrance Week every fall at Syracuse University, which lost 35 study-abroad students in the bombing. They were flying home for the holiday break.

“The men and women of the FBI have worked tenaciously for 32 years to investigate this horrific terrorist attack,” said Steven M. D’Antuono, assistant director in charge of the FBI’s Washington Field Office. “During that time, we have persistently focused on identifying who was responsible for the bombing, with a dedicated focus on bringing justice to the 270 victims and their families. These charges are a culmination of decades of work and a strong collaboration with Scottish authorities and other international and domestic law enforcement partners.”

Wray provided a reminder that the FBI’s resolve does not diminish with the passage of time.

“Today’s announcement should remind the world that when Americans are harmed, the FBI and the United States government will never stop pursuing justice for our citizens, no matter where that takes us, how long it takes us to get there, or how difficult the road might be,” Wray said.

When a 1990s kidnapping case led FBI agents to individuals who were using the internet to share images of child sexual abuse and lure children into harm, it launched a revolution in how the FBI investigates these crimes.

The Next Generation Identification Iris Service gives the FBI and partner agencies the ability to capture, catalog, and make rapid comparisons of iris images with a high rate of accuracy.