A Multi-Agency Group of Bomb Experts 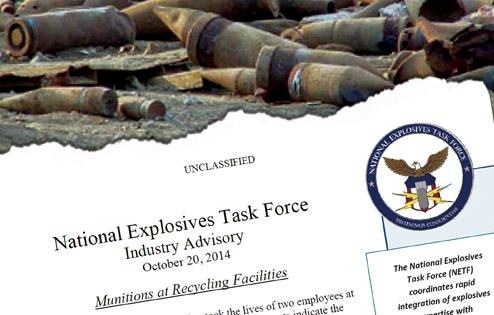 One role of the National Explosives Task Force is to alert partners to potential incidents through the use of bulletins and advisories, such as the one above regarding unexploded munitions at recycling facilities.

Bomb threats are not a new tactic for criminals and terrorists, but when scammers used them in a ruse in 2013 to fraudulently obtain pre-paid money cards from retailers around the country, first responders needed to know about it. A bulletin was sent to public safety officials explaining the scheme. The notice advised that although no devices had been found linked to this particular threat, first responders should not automatically assume any bomb threat is a hoax.

The awareness bulletin was a product of the National Explosives Task Force (NETF), a multi-agency assemblage of bomb technicians, analysts, and professional staff that formed in 2011 to quickly analyze and disseminate intelligence related to improvised explosive devices (IEDs) and other explosive materials in the U.S. The task force, located at FBI Headquarters, includes personnel from the FBI, the Bureau of Alcohol, Tobacco, Firearms, and Explosives (ATF), the Department of Homeland Security, and the Office of the Director of National Intelligence. The arrangement puts some of the nation’s leading bomb experts together in the same room.

“We are trying to create a common operating picture for the government to see what the problem set is domestically in terms of explosives and IED incidents,” said Whitney Barnhart, an FBI analyst who has been on the task force since its inception. “And we’re using that information to create products to support federal, state, and local bomb technicians and the work that they’re doing.”

The NETF’s main functions include gathering and analyzing intelligence on explosives, integrating the intel into investigations (to disrupt plots, for example), and pushing information out to partners—which include more than 3,100 public safety bomb technicians on more than 400 bomb squads around the country. The task force is notified every time the FBI or the ATF responds to an explosives-related incident, regardless of jurisdiction, and also reviews explosive incidents reported by public safety bomb squads, military explosive ordnance disposal teams, and other government reporting sources.

“It became apparent years ago that we needed an interagency task force looking at the intelligence from these IED incidents and quickly pulling together joint intelligence products for the bomb tech community to make sure that everybody is situationally aware,” said James Yacone, assistant director of the FBI’s Critical Incident Response Group, under which NETF operates.

Depending on circumstances, the task force might push out a detailed “Quick Look” report (within 24 hours of a major incident), an industry advisory, or an awareness bulletin like the bomb threat scam advisory in 2013. The bulletins typically contain device information and tactics, techniques, and procedures used by the perpetrator(s) to raise awareness among people who most need to know. Last May, for example, the task force sent an industry advisory about the use of chemical reaction bombs after four similar incidents occurred in the Washington, D.C. area. (Fortunately, the perpetrators in these incidents were quickly arrested.) And last October, an advisory sought to bring attention to the dangers of unexploded munitions at recycling facilities after an explosion at one in Illinois killed two employees.

“We’re taking information that’s coming in to be more proactive about what we’re seeing ahead of events and incidents,” said Barnhart, the NETF analyst.

Another example is a system the task force developed to notify key personnel in local jurisdictions when inmates held on explosives-related charges are set to be released in their areas. The Bureau of Prisons notifies the task force, which vets the information and distributes it to ATF field offices and FBI bomb techs. Bradley Cooper, an ATF analyst who helped develop the inmate-release notification with an FBI partner, said the multi-agency approach makes sense.

“When everybody comes together from different agencies to work a common goal, it’s remarkable,” said Cooper, whose task force experience includes working alongside FBI personnel after the Oklahoma City bombing 20 years ago.

The full weight of the task force’s effectiveness comes into focus when a major event occurs. When multiple agencies gather in a command post, they know each other and they know who has the critical explosives expertise to work an investigation.

“That’s the beauty of NETF,” Yacone said. “It brings together all the special mission experts.”