Securing Cyberspace is a Shared Responsibility 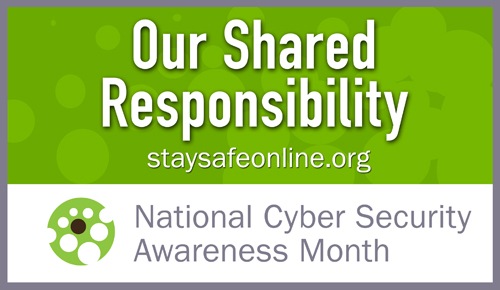 October is National Cyber Security Awareness Month, administered by the Department of Homeland Security. This is the perfect time of year for individuals, businesses, and other organizations to reflect on the universe of cyber threats and to do their part to protect their networks, their devices, and their data from those threats.

The FBI—working in conjunction with its many partners at the local, state, federal, and international levels, as well as with industry—takes its own role in cyber security very seriously. That role involves operational efforts—including investigating and disrupting cyber-related national security threats and cyber crimes and collecting, analyzing, and disseminating cyber threat intelligence. It also involves outreach efforts to industry.

Here are just a few examples of how we’re doing all of that:

The Bureau will continue to work jointly with our national security and law enforcement partners to address threats to the nation’s cyber security from nation-states, terrorist organizations, transnational criminal enterprises, and child predators. But government can’t do it alone—assistance and vigilance from the public is vital.

Stay tuned to this website during the month of October—we’ll be providing you with tips that will help keep your families and your businesses safe from cyber criminals.

As part of National Cyber Security Awareness Month, we will be providing weekly cyber tips through our News Blog and adding them to this page. Check back throughout the month for the latest.

In May 2015, the owner and operator of the original Silk Road website—an online black market designed to enable its users to buy and sell illegal drugs and other unlawful goods and services anonymously—was sentenced to life in prison. The Silk Road site had previously been taken down by law enforcement in November 2013. In November 2014, the owner and operator of a resurrected Silk Road—Silk Road 2.0—was arrested and charged, and law enforcement took down that site as well, along with dozens of other so-called “dark market” websites. The investigation involved the cooperative efforts of the FBI and numerous local, state, federal, and international partners.

In April 2015, a multi-national law enforcement effort was responsible for taking down a cyber criminal forum that served as a one-stop, high-volume shopping venue for some of the world’s most prolific cyber criminals. Darkode was an underground password-protected meeting place for those interested in buying, selling, and trading malware, botnets, stolen personally identifiable information, credit card information, hacked server credentials, and other pieces of data and software. The FBI was able to infiltrate the forum at the highest levels and collect evidence and intelligence on Darkode members. During the takedown, charges, arrests, and searches involved 70 members and associates around the world.

In April 2015, a coordinated international law enforcement and private sector cyber effort resulted in the takedown of a botnet known as Beebone—a “downloader” that allowed other forms of malware to be installed on victims’ computers without their knowledge or consent. The secondary infections installed by Beebone included software that steals banking logins and passwords as well as fraudulent anti-virus software and ransomware.

Broker sentenced for defrauding more than 800 trucking companies in nearly a dozen states.