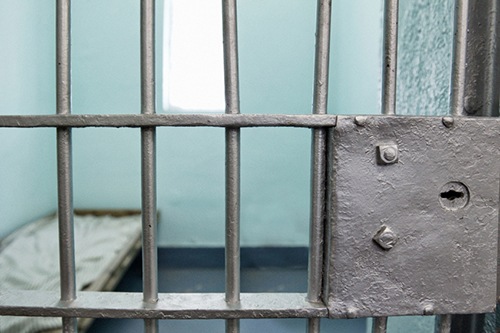 It’s one of the more outrageous prison plots the FBI has investigated in recent memory: An Ohio inmate—and the clinical psychologist who was in love with him—were among five people indicted last month and charged with threatening a murder witness.

“I’ve seen a lot of creative inmates trying to get released,” said Special Agent Eric Rardain, who investigated the case out of our Philadelphia Field Office, “but never in my 22 years of law enforcement have I seen anyone go to this extreme.”

Nicholas Stanishia, who is serving a life sentence at the Southeastern Correctional Institution in Lancaster, Ohio, apparently believed he could get out of jail if the man who saw him kill his ex-girlfriend recanted his testimony.

In 1997, Stanishia murdered his former girlfriend and shot her then boyfriend, who survived and later testified to what he saw. Stanishia was on the run for three years, during which time he also committed a home invasion and rape. At his murder trial in 2001, based on the witness’ testimony, Stanishia was found guilty and received a life sentence.

To carry out his witness threat plan, Stanishia needed an ally on the outside—and he had one in Marcia Weber. The two had met years earlier when Weber was starting her clinical psychology career at a local prison where Stanishia was incarcerated on unrelated charges. Theirs was initially a doctor-patient relationship, but around 2006, after years of keeping in touch, Weber professed her love for him and began to help him orchestrate the scheme they hoped would win his freedom.

“It was apparent in the investigation that Dr. Weber was head over heels for Stanishia. She even sent him nude pictures of herself,” Rardain said, explaining that the two exchanged hundreds of calls, and although she did not work at the institution where Stanishia was an inmate, she visited him monthly and wrote often, signing some letters, “Your loving wife.”

Stanishia and Weber allegedly hired a private investigator to find out where the murder witness and his wife lived and worked as well as information about their children. Then they allegedly hired a man to place a gas can on the porch at the witness’ family home in Pennsylvania.

According to the indictment, a fellow inmate helped smuggle a cell phone into the prison, which Stanishia used to call the witness and ask if he had received his previous “message.” Stanishia claimed to be a ranking member of the Aryan Brotherhood and suggested that the witness sign a new affidavit—being prepared with Weber’s help—recanting his original testimony. He told the man the Aryan Brotherhood could easily reach him and his family. “I want you to think about this,” Stanishia said.

The frightened witness called local law enforcement, who contacted the FBI. It didn’t take long for investigators to unravel the scheme.

“This was a well-calculated threat,” Rardain said, “but the witness did the right thing by contacting law enforcement.” He added that while “Stanishia is the bad guy here, he could not have carried out the threat without Weber. We believe she was coordinating the entire plan.”

In October, Stanishia and Weber, along with three other accomplices—two of whom are already in jail—were indicted and charged with three counts relating to an interstate conspiracy to transmit threats to a witness. Weber is being held without bond. Trial is scheduled for December 3, 2014.