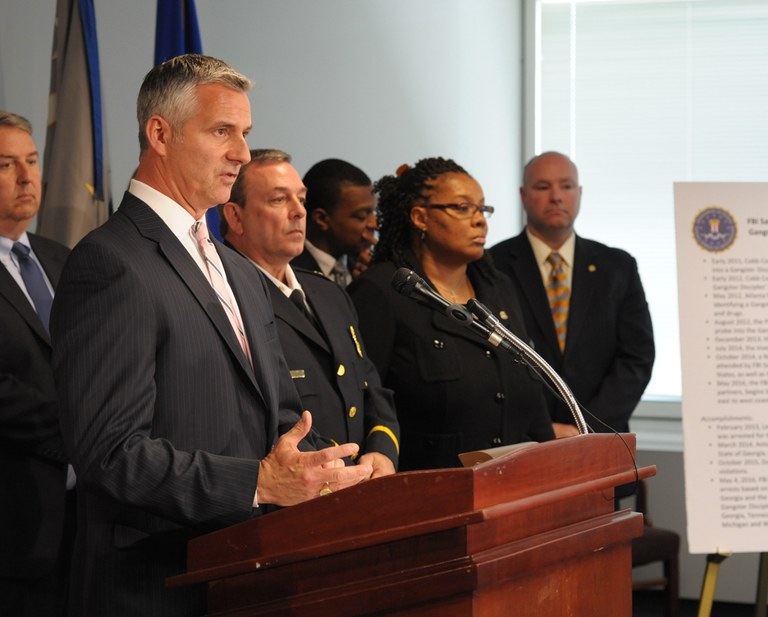 FBI Atlanta Special Agent in Charge J. Britt Johnson and officials from partner agencies announce the indictment of 32 suspected members of the violent Gangster Disciples gang during a press conference in Atlanta on May 4, 2016. A similar press conference was held in Memphis announcing the indictments of 16 additional suspects.

Forty-eight alleged members of the violent Gangster Disciples gang—including the top leaders in Tennessee and Georgia—have been charged in two indictments, accused of conspiring to participate in a racketeering enterprise that included multiple murders, attempted murder, and drug crimes. Forty-five indicted defendants were taken into custody today across nine states, while three remain at large.

Today’s announcements of the indictments—made during press conferences in Memphis and Atlanta—came on the heels of multi-agency investigations involving the FBI’s Memphis and Atlanta Field Offices and numerous local, state, and federal law enforcement partners who targeted the Gangster Disciples, a national gang active in at least two dozen states. According to court documents, the scope of the group’s crimes is broad—from violent crimes and threats of violence to drug trafficking to financial crimes like credit card and bank fraud.

According to Assistant U.S. Attorney General Leslie Caldwell, Criminal Division, “It is the very of core of law enforcement’s mission to ensure that everyone feels safe in their homes and neighborhoods, and it is a hard reality that many people across our country simply do not enjoy this basic sense of security because of gangs like the Gangster Disciples. That is why it is so significant that today’s indictments charge top leaders within the Gangster Disciples.”

Added Special in Charge J. Britt Johnson, Atlanta FBI Field Office, “The Gangster Disciples are a highly organized and ruthless gang that recognizes no geographical boundaries, and its members have far too long indiscriminately preyed upon and infected the good people of our communities like a cancer. The FBI, along with our law enforcement partners, is committed to seeing this campaign through, and once and for all putting an end to the Gangster Disciples’ reign of terror.”