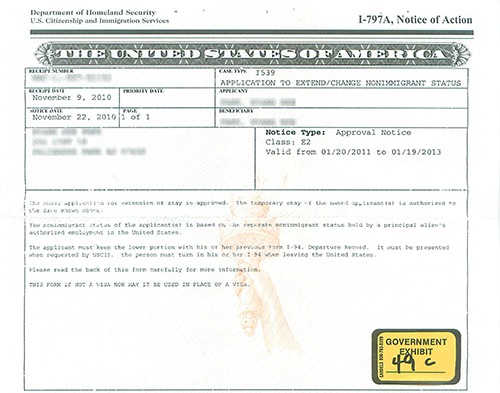 Federal I-797 forms—like this one—stolen from a U.S. Citizenship and Immigration Services facility in California helped a criminal organization fraudulently obtain driver’s licenses and visas for hundreds of individuals living in the United States illegally.

For the hundreds of individuals living in the United States illegally who responded to advertisements by Young-Kyu Park and his associates, the promise of an authentic visa or a valid driver’s license was well worth the $3,000 to $4,500 price tag.

Park, who was recently sentenced to six years in federal prison, was the leader of a multi-state criminal organization that fraudulently obtained driver’s licenses and other documents such as student visas for illegal aliens and other ineligible individuals.

In New Jersey, New York, California, Nevada, Virginia, and Georgia between 2010 and 2012, “it was open season for driver’s licenses,” said Special Agent Theresa Fanelli. “Park was willing to sell to whoever wanted to buy.” In Las Vegas, his associates even operated a shuttle service to take clients to the Department of Motor Vehicles to obtain a license using their bogus credentials. And with that valid license, individuals had a key piece of identification that enabled them to access other services previously unavailable to them.

Park was one of 22 people charged in 2012 with providing a range of illegal services predominantly to South Koreans who were illegally residing in the U.S. He was assisted in his criminal enterprise by brokers he employed around the country, along with a contract employee of the U.S. Citizenship and Immigration Services (USCIS), who stole authentic forms that turned out to be central to the scheme.

Through a third party, Park was able to obtain I-797 forms from USCIS employee Martin Trejo. The form is used by the federal government to convey an immigration benefit. For example, state agencies that issue driver’s licenses rely on the I-797 form to verify the authenticity of an applicant’s foreign passport and lawful presence in the U.S.

During the investigation into Park, it was determined that the I-797 forms being used illegally were not counterfeit. “We knew someone on the inside had to be selling the forms, because the public has no way to access them,” said Special Agent Nathan Kim, who, along with Fanelli, investigated the case out of our Newark Division.

The evidence led to Trejo, who was arrested and charged with conspiracy to steal government property and interstate transportation of stolen goods. In September 2014, he was sentenced to 26 months in prison.

Trejo, who had worked at a USCIS warehouse in California for more than a decade, estimated that he stole about 1,000 forms to make extra money, Kim said. “The form center has since made numerous changes to mitigate the problem and secure these forms.”

His customers—many were arrested and charged with state violations—“knew they didn’t have legal status,” Fanelli explained, adding that state motor vehicle offices were exceptionally helpful during the investigation.

Park pled guilty to several charges, including producing false identification documents, conspiracy to steal government property, and money laundering. When his prison term is up, he will be deported to South Korea.

“He always claimed that he was a Robin Hood of the community, helping people who had no other alternatives,” Fanelli said. “Of course, he was benefiting handsomely and living in high style.” She added, “Park knew what he was doing was illegal. He purposely exploited vulnerabilities in the immigration and motor vehicle process to line his own pockets.”

Multi-agency effort dismantles one crew, but these incidents are on the rise.