Criminal Enterprise Leader Among Those Convicted 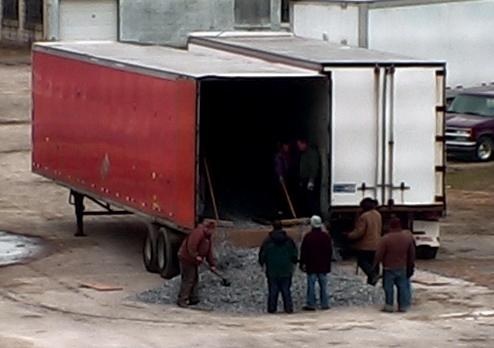 A surveillance image shows members of Michael Wymer’s Ohio chop shop operation emptying scrap aluminum cargo out of a stolen trailer so the trailer could be chopped up and sold as scrap metal.

In the early 1990s, a Toledo, Ohio man—Michael Wymer—was sentenced to a lengthy term in state prison for heading up an extensive truck theft and chop shop operation.

Wymer, however, apparently never learned his lesson. Upon his release from prison several years ago, he picked up where he left off, setting up another criminal enterprise to steal trucks, disassemble them in his chop shop, and sell them as scrap metal. But this time, Wymer’s activities—which crossed state lines—garnered the attention of the FBI, and last month, the 56-year-old was sentenced in federal court to 27 years in prison. And Wymer’s 13 co-conspirators—including his son, two brothers, and two nephews—have all either pled guilty or been convicted at trial for their roles in the illegal enterprise.

At Wymer’s sentencing appearance, the federal judge ordered that all of the defendants in the case share in paying restitution to the victims of their crimes—mostly independent truck owners/operators—to the tune of nearly $2.3 million. That figure, according to the judge, is likely a low estimate and doesn’t take into account the emotional harm suffered by the victims, whose trucks were often their livelihoods.

According to the charges brought against Wymer and the others in the case, the scheme ran from at least August 2012 through February 2013. Wymer and his cohorts usually traveled outside of the Toledo area—including to Michigan and Indiana—to steal the trucks so they could avoid detection by one single jurisdiction.

Here’s how the scheme worked: Wymer and several others involved in the enterprise went out on the road “shopping” for semi-trucks and trailers, often at truck stops or other locations where trucks might converge that were fairly close to interstate highways. But they wouldn’t hesitate to stop virtually anywhere if an opportunity presented itself.

They would usually be in Wymer’s personally owned semi-truck (minus a trailer) or in a car that belonged to Wymer. If they were in the semi, they would back the truck onto the trailer they wanted and then tow it away. If in the car, one or two of the perpetrators would break into an empty semi-truck with an attached trailer, manipulate the ignition to get it started, and drive the entire vehicle onto the closest interstate highway.

In terms of the cargo these stolen trucks were carrying, Wymer preferred items that could be chopped into scrap metal—so he stole things like motorcycles, all-terrain vehicles, copper wire, spools of metal, even actual loads of scrap metal. How did he know what the trucks were hauling? By breaking into the trailers and taking a look.

Once back in Toledo with the stolen property, Wymer would take the truck to one of his two chop shop locations, where he had everything he needed—from heavy moving equipment and floor jacks to blow torches and chain saws. And he moved quickly—he could remove the parts from the truck (to sell them), and then “chop” the rest of the truck, the trailer, and the trailer’s contents into scrap metal within a couple of hours. He would then load the material into one of his trucks and transport it to various businesses and/or recycling companies interested in buying scrap metal.

How did we get the evidence we needed to convict Wymer and his crew? Much of it came from video surveillance cameras, one placed by law enforcement on utility poles outside each of Wymer’s chop shop locations, and several more placed by Wymer himself inside his chop shops to keep an eye on his merchandise. So we were able to see the stolen trucks and trailers being driven into these shops—and those same vehicles being taken apart by Wymer and his employees.

Because of the interstate nature of the case, there were a number of law enforcement agencies both inside and outside Ohio that played a role in the investigation. Special thanks to the Ohio State Highway Patrol—who joined our new Organized Crime Task Force shortly after the investigation—and the Ohio Bureau of Motor Vehicles for their efforts.

As for Michael Wymer, his lengthy sentence in the federal system almost guarantees that he will not get a third opportunity to break the law.

Story about the creation of the Hostage Recovery Fusion Cell.

More than 240 arrested, charged with $712 million in false Medicare billings.