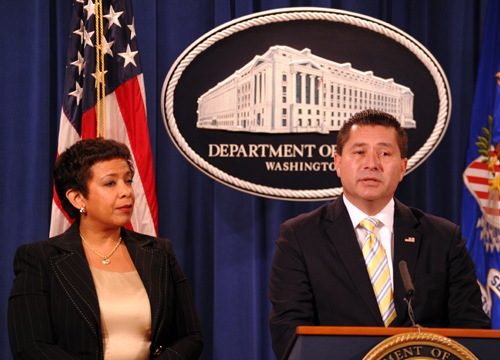 The charges, which include racketeering, wire fraud, and money laundering conspiracies, are part of a large-scale investigation that alleges a 24-year corruption scheme involving FIFA officials and corporate executives.

During a press conference this afternoon at Department of Justice (DOJ) headquarters in Washington, D.C., Attorney General Loretta Lynch expressed commitment to putting a stop to the corruption. “The message from this announcement should be clear to every culpable individual who remains in the shadows, hoping to evade our investigation: You will not wait us out. You will not escape our focus,” said Lynch.

Six months ago, DOJ announced a 47-count indictment charging nine FIFA officials and five corporate executives for their roles in a long-running scheme to corrupt the sport, which included bribes and kickbacks totaling more than $150 million that were paid or agreed to be paid to obtain media and marketing rights to international soccer tournaments.

Today’s superseding indictment brings the total number of individuals and organizations charged to date to 41. Of those, 12 individuals and two sports marketing companies have already been convicted.

The investigation is being conducted by the FBI’s New York Field Office in partnership with the Internal Revenue Service - Criminal Investigation, the U.S. Attorney’s Office for the Eastern District of New York, and a variety of international partners.

“The most recent wave of charges announced today is but one more step forward in our effort to level the playing field of soccer,” said FBI New York Assistant Director in Charge Diego Rodriguez. “When criminals bring their corrupt activity to our shores by using U.S. banks and U.S. companies to pay bribes and otherwise further their criminal objectives, they will play by our rules.”