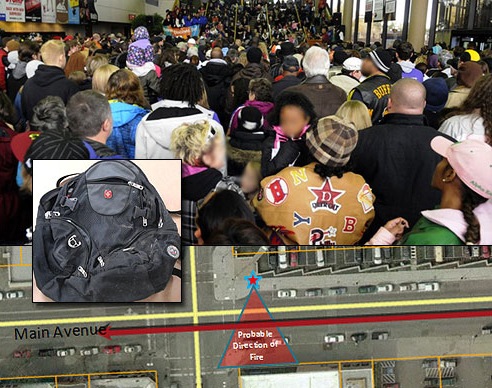 On January 17, 2011, as hundreds of people gathered (above) in downtown Spokane to participate in the Martin Luther King, Jr. Day Unity March, Kevin Harpham placed a backpack bomb (inset) along the parade route on Main Avenue. The graphic shows the likely direction of the blast had the bomb detonated.

Had his homemade bomb gone off—one he had diabolically constructed using shrapnel coated with a substance meant to keep blood from clotting in wounds—Kevin Harpham would have undoubtedly caused the death and injury of many people at last year’s Martin Luther King, Jr. Day Unity March in Spokane, Washington.

Instead, Harpham was eventually caught and recently sentenced to 32 years in prison for a hate crime and other offenses related to the attempted bombing. The case illustrates how a quick response by citizens and local law enforcement averted a tragedy and how teamwork and time-tested investigative techniques led to the apprehension of an individual who has shown no remorse for his actions.

“Clearly he intended to detonate the device, cause mass carnage, and then survey the devastation,” said Special Agent Frank Harrill, who supervised the investigation. “Harpham was acting out against what he termed multiculturalism, but his hatred was firmly rooted in violent white supremacy. This was a prototypical hate crime.”

On January 17, 2011, as hundreds of people gathered in downtown Spokane to participate in the march, Harpham placed his backpack bomb along the parade route at Washington Street and Main Avenue. Alert city workers discovered the suspicious backpack before the march started, and Spokane Police Department officials changed the route as a precaution. The Spokane Police and Sheriff’s Office bomb squad was called in, and their precision in disarming the device enabled evidence to be preserved that would help lead FBI agents to Harpham.

The FBI’s Joint Terrorism Task Force (JTTF) in Spokane immediately began an investigation, and JTTF members canvassed the region for batteries and other components similar to those used in the bomb. Within a month, in a small town about 60 miles north of Spokane, they discovered that a local outlet of a large retail chain was selling the same kind of fishing weights Harpham had used as shrapnel.

Store records showed there had been three large purchases of the weights in recent months—two were paid for in cash, but a debit card was used in one transaction, and it belonged to Harpham. At the same time, the FBI Laboratory had been working to extract a DNA sample from the backpack that was later matched to Harpham through his military records.

Investigators also learned of Harpham’s white supremacy postings on the Internet and his affiliation with a neo-Nazi group called the National Alliance.

Because he lived in a remote, relatively inaccessible area and was likely heavily armed, our Hostage Rescue Team devised a ruse to lure Harpham out of his house. He was arrested March 9, 2011 without incident—but as agents suspected, he was armed when taken into custody.

“Kevin Harpham was the lone wolf that all of us in law enforcement dread,” Harrill said. “He lived alone, he worked alone, and he didn’t foreshadow the bombing plot in any meaningful way. He targeted those who were attempting to celebrate an event meant to unite society,” Harrill added, “and he was prepared to indiscriminately kill men, women, and children.”

Harrill credited teamwork and strong partnerships for stopping Harpham and bringing him to justice. “From the workers who noticed the device to the police response, the JTTF investigation, the expertise of the FBI Laboratory, and the prosecuting skill of the U.S. Attorney’s office—everything worked just as it should have.”

A Bomb Designed to Kill 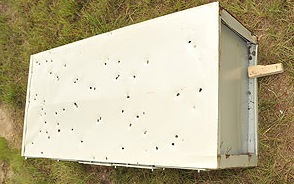 Kevin Harpham had been an artilleryman in the Army, and the bomb he meticulously constructed—using 128 fishing weights for shrapnel, each coated with an anticoagulant commonly found in rat poison—was not a typical improvised explosive device (IED).

“JTTF members on this investigation have had experience on many other bombing cases both here and abroad,” said Special Agent Joe Cleary, who worked alongside other agents, evidence technicians, and intelligence analysts on the Harpham case. “But none of us had ever seen this type of bomb in the U.S.”

Cleary explained that most IEDs are triggered with fuses or timers. “This was command-detonated,” he said. “Harpham designed it so he could remotely control when the blast would occur and the direction in which the shrapnel would fly. He placed the bomb so it would explode directly across the line of the march, thereby inflicting maximum damage to the marchers. This was a weapon of mass destruction.”

When bomb experts from the FBI Laboratory reconstructed the device and detonated it, the results were sobering, Cleary said. “The shrapnel exploded with such a high velocity that some targets in the shape of humans were blown over, and a metal filing cabinet was perforated—it was filled with holes.”

“Harpham intended to use this extremely lethal weapon on individuals solely because of their race and perhaps their religion,” Cleary said. “His plan was to wreak havoc on a crowd of innocents.”

On a September evening in 2009, a woman answered a knock at her Nashville, Tennessee door from someone claiming to be an immigration agent.

They hijacked identities on the other side of the globe.