Remembering the Victims of Pan Am Flight 103

Family members of the 270 victims who died 30 years ago when a terrorist bomb exploded aboard Pan Am Flight 103 over the town of Lockerbie, Scotland, gathered for their annual memorial service today at Arlington National Cemetery in Virginia to remember their loved ones and to hear their names spoken.

“It has been said that the dead are never really gone as long as someone speaks their names,” said Kathryn Turman, assistant director of the FBI’s Victim Services Division. “For 30 years and in many places, we have spoken the names of the 270 individuals who were killed in the air and on the ground on December 21, 1988. We continue to speak their names.”

Turman was one of several speakers at the service who addressed hundreds of family members. Also in attendance were current and retired investigators, prosecutors, and law enforcement personnel from the FBI and other federal agencies, along with their Scottish counterparts.

The bombing of Pan Am Flight 103, which took the lives of citizens from 21 countries—including 190 Americans—as well as 11 residents of Lockerbie, was the largest terrorist attack in American history until 9/11. Although two Libyan intelligence officers were charged with the bombing and tried by a special Scottish court, the investigation—both the FBI’s and Police Scotland’s—remains open and active.

“I speak for my colleagues in the FBI, past and present, when I say the FBI does not forget,” Turman told the group. “The active pursuit of truth and justice for the victims of the bombing of Pan Am 103 remains our mission and our goal.”

“For 30 years and in many places, we have spoken the names of the 270 individuals who were killed in the air and on the ground on December 21, 1988. We continue to speak their names.”

The annual Arlington service took place on a secluded hilltop where a memorial cairn stands, the traditional Scottish monument to the dead. After the bombing, the town of Lockerbie sent 270 stones to the United States—one for each of the victims—and the blocks were made into a cairn by a builder whose daughter died on Pan Am Flight 103.

“We come here to honor and remember,” Turman told the families, and she thanked them for all that they have done in the three decades since the tragedy. “As a group,” she said, “you have changed the landscape for victims of terrorism. You have fought to improve aviation security. You have fought to change laws to hold countries that support terrorists responsible for their crimes. You have fought to ensure that the U.S. government does a better job of supporting victims and keeping them informed.”

At a ceremony yesterday at FBI Headquarters in Washington, D.C., FBI Director Christopher Wray also thanked the families and reminded them that although the wheels of justice sometimes turn slowly, “the FBI never, ever forgets.” Wray added, “I want you to know, as I stand here today, that we in the FBI have not forgotten those 270 lives lost 30 years ago. We have not forgotten what you lost that night. We have not forgotten our responsibility to find those behind the attack, and to bring whatever measure of peace and justice we can.”

The remembrance service at FBI Headquarters included the dedication of a permanent memorial to the victims of the Pan Am Flight 103 bombing. “This memorial will serve as a reminder,” Wray told the families, “for all FBI employees, official visitors, and members of the public, of the 270 lives lost in that hateful attack, and the legacies they left behind.” 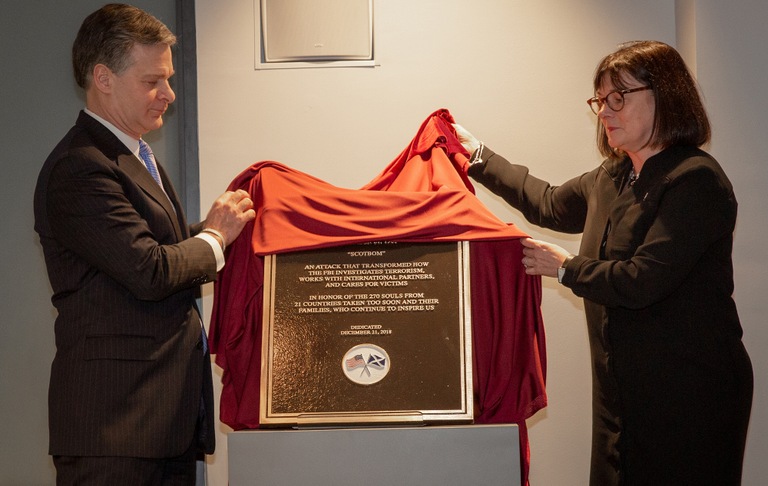 Chinese telecommunications equipment manufacturing giant Huawei has been charged with bank fraud, wire fraud, conspiracy to defraud the United States, and theft of trade secrets, among other crimes.