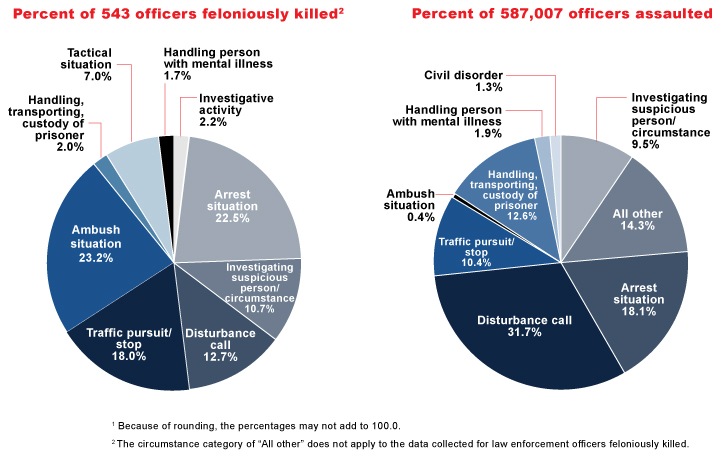 Here’s a look at some of the data collected for this report:

Our Law Enforcement Officers Killed and Assaulted (LEOKA) report is intended to provide law enforcement agencies with detailed descriptions of circumstances leading to officer fatalities. This data can then be incorporated into police training programs to help officers stay safe during similar situations. 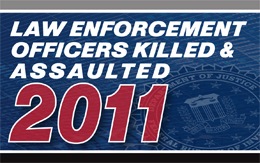 The primary goal of our overall LEOKA program is to reduce incidents of law enforcement deaths and assaults. In addition to its annual report, the program also offers an officer safety awareness training course that provides potentially life-saving information to help law enforcement personnel enhance their situational awareness during activities like arrests, traffic stops, foot pursuits, ambushes, and other high-risk encounters that police face on a daily basis.

Beyond services provided by the LEOKA program, the FBI offers additional training initiatives geared toward officer safety to our law enforcement partners.

In addition to the above training, the FBI’s National Crime Information Center (NCIC)—accessed by more than 92,000 agencies—offers a measure of protection for law enforcement as well, particularly through its recently added Violent Persons File. Once fully populated with data from our users, a quick response from an online NCIC query can warn officers on the spot if, during a routine traffic stop or another type of encounter, they come across an individual who has a violent criminal history or who has previously threatened law enforcement.

The release of this latest LEOKA report clearly demonstrates what we already know—despite the dangers of law enforcement, the profession continues to attract brave men and women willing to make the ultimate sacrifice to protect their fellow citizens.

Located less than 200 miles from the Arctic Circle, our resident agency in Fairbanks is one of the FBI’s most remote offices—but its three investigators cover an expansive amount of territory and help safeguard some of the country’s most valuable infrastructure.