Agents knock on door in Brooklyn.

Members of New York’s infamous Five Families—the Bonanno, Colombo, Gambino, Genovese, and Luchese crime organizations—were rounded up along with members of the New Jersery-based DeCavalcante family and New England Mafia to face charges including murder, drug trafficking, arson, loan sharking, illegal gambling, witness tampering, labor racketeering, and extortion. In one case involving the International Longshoremen’s Association (ILA) at the Ports of New York and New Jersey, the alleged extortion has been going on for years. 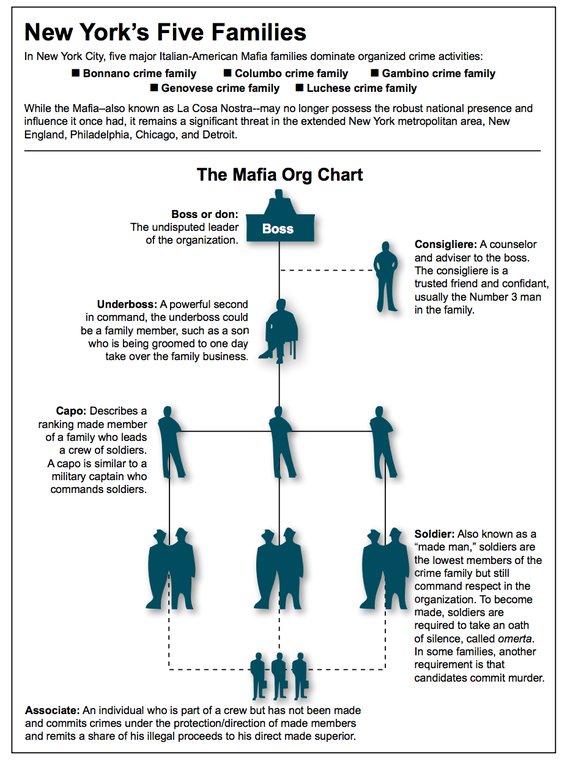 More than 30 of the subjects indicted were “made” members of the Mafia (see graphic), including several high-ranking family members. The arrests, predominantly in New York, are expected to seriously disrupt some of the crime families’ operations.

“The notion that today’s mob families are more genteel and less violent than in the past is put to lie by the charges contained in the indictments unsealed today,” said Janice Fedarcyk, assistant director in charge of our New York Field Office. “Even more of a myth is the notion that the mob is a thing of the past; that La Cosa Nostra is a shadow of its former self.”

The Mafia—also known as La Cosa Nostra (LCN)—may have taken on a diminished criminal role in some areas of the country, but in New York, the Five Families are still “extremely strong and viable,” said Dave Shafer, an assistant special agent in charge who supervises FBI organized crime investigations in New York.

Today’s operation began before dawn. Some 500 FBI personnel—along with about 200 local, state, and other federal law enforcement officers—took part, including key agencies such as the New York Police Department and the Department of Labor Office of Inspector General. By 11 a.m., more than 110 of the 127 subjects charged had been taken into custody.

The idea for a nationally coordinated LCN takedown originated at the Department of Justice last summer, said Shafer, a veteran organized crime investigator. “We have done big LCN takedowns before, but never one this big.”

The LCN operates in many U.S. cities and routinely engages in threats and violence to extort victims, eliminate rivals, and obstruct justice. In the union case involving the ILA, court documents allege that the Genovese family has engaged in a multi-decade conspiracy to influence and control the unions and businesses on the New York-area piers.

“If there’s money to be made,” said Diego Rodriguez, special agent in charge of the FBI’s New York criminal division, “LCN will do it.” He noted that today’s Mafia has adapted to the times. “They are still involved in gambling and loan sharking, for example, but in the old days the local shoemaker took the betting slips. Now it’s offshore online gambling and money laundering. If you investigate LCN in New York,” Rodriguez added, “it’s a target-rich environment.”