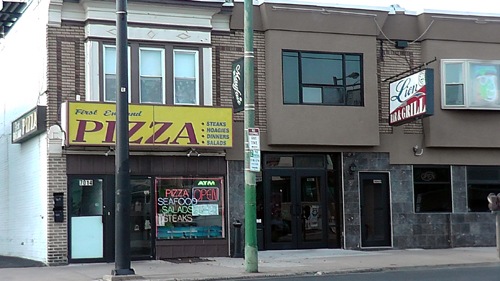 Members and associates of an Albanian criminal enterprise conducted much of their illegal activity in this Philadelphia bar they owned and in their pizza eatery next door.

Loan sharking. It’s a term that might conjure up historical images of shadowy organized crime figures handing out questionable loans at exorbitant interest rates to desperate customers, usually followed by threats of violence if the loans aren’t paid off.

Unfortunately, loan sharks are alive and well in 2015 and continue to benefit from the financial misfortunes of others. Last month, the two top leaders of an Albanian criminal organization operating in the Philadelphia area were sentenced to lengthy federal prison terms for running a violent loan sharking and illegal gambling ring. Ylli Gjeli, the boss, and Fatimir Mustafaraj, the muscle, were convicted late last year after a six-week trial. Two other defendants were convicted at the same trial.

From 2002 to 2013, Gjeli and Mustafaraj led the multi-million-dollar criminal enterprise with two primary sources of income: loan sharking and illegal gambling. The illegal gambling arm of the operation included an online sports betting website that contributed more than $2.9 million in gross profits to the group’s criminal coffers. There was often crossover between the two arms of the organization—when customers couldn’t cover their gambling losses, bookies would refer them to the loan sharking side of the house.

The illegal activity took place in various Philadelphia bars and coffee houses owned or controlled by the organization. In addition to the gambling operation, Gjeli, Mustafaraj, and company generated money by making loans to customers at interest rates that ranged from 104 percent to 395 percent and demanding weekly repayments.

These repayment demands were almost always accompanied by acts of intimidation. Customers were menaced with firearms, hatchets, and threats of physical harm to themselves or family members. In a number of instances, perhaps to create the false impression that the Albanians were part of a larger and more powerful organization, customers were told that “people from New York” were willing to cause bodily harm to anyone who didn’t pay up.

Gjeli and Mustafaraj not only directed the criminal activities of their underlings—who included debt collectors and bookies—they also got their own hands dirty by directly financing loans, intimidating and threatening violence against customers to collect loan payments, and physically assaulting subordinates and associates who stole from the organization or who didn’t collect their debts on time.

According to Philadelphia FBI Special Agent in Charge Edward Hanko, Gjeli and Mustafaraj took advantage of their victims twice. “They provided loans at outrageous interest rates to those unable to obtain loans from traditional sources,” he explained, “and then used threats and violence to collect on those illegal loans.”

The investigation revealed that the Lion Bar, an establishment owned by Gjeli, served as the main hub of the organization’s criminal activities—it was where Gheli, Mustafaraj, and their associates met with current and prospective borrowers. What they didn’t realize was that one of their borrowers was actually an FBI undercover agent, and during one particular meeting, details of a $50,000 loan were worked out with him. Gjeli informed our undercover agent that his limbs would be broken if he didn’t pay back what he owed in a timely manner.

Also during the investigation, law enforcement was able to make more than 400 audio recordings and numerous surveillance videos of the criminal activity. By August 2013, arrests were made, including those of Gjeli and Mustafaraj. And the FBI executed a series of search warrants at related businesses, homes, vehicles, and a storage locker. Law enforcement recovered guns, cash, computers, phones, video surveillance, loan applications, loan ledgers, and gambling records. Fortunately, the group kept good records of its criminal activities, and much of the evidence seized in August was presented at trial.

That evidence, plus trial testimony from many of Gjeli’s and Mustafaraj’s customers—and even members of their own criminal organization—was enough to convince a jury of the defendants’ guilt.

And as with many successful investigations, the FBI didn’t do it alone: Our Philadelphia Field Office worked closely with the Pennsylvania State Police, New Jersey State Police, Montgomery County Detective Bureau, and the Internal Revenue Service to dismantle a very dangerous and prolific criminal enterprise.