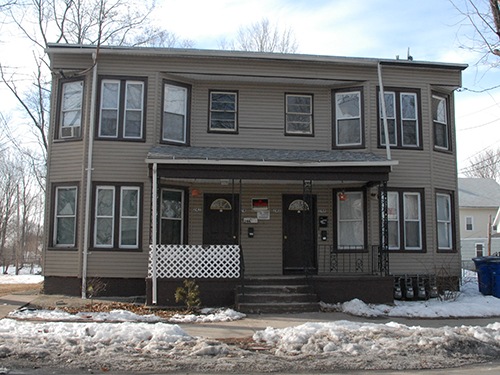 In March 2012, during an investigation into the Grape Street Crips, members of the New Haven Safe Streets Task Force executed a number of search warrants, including one for the above residence of the gang’s leader, Donald Ogman. Investigators found crack cocaine, drug paraphernalia, and other illegal items.

He headed a dangerous criminal organization responsible for not only a great deal of the gang violence occurring on the streets of New Haven, Connecticut, but also for the large-scale distribution of cocaine in and around the city. But earlier this month, Donald “Main” Ogman was sentenced to more than 15 years in prison after pleading guilty to federal drug charges. Nineteen of his fellow gang members and other associates have previously pled guilty to various federal charges.

And as a result, the streets of New Haven are a little safer these days.

Under Ogman’s leadership, his criminal enterprise—the Grape Street Crips—was a force to be reckoned with. Much of the violence—a lot of it in the Hill neighborhood of New Haven—was attributed to the turf battle occurring between the Crips and other gangs. The Grape Street Crips wanted to maintain their influence over drug trafficking and firearms trafficking in the Hill, and they used intimidation, threats of violence, shootings, assaults, and homicides to make sure that they did.

But Ogman also had a direct hand in the trafficking of drugs—he would purchase large quantities of cocaine from criminal suppliers, and then, after processing the cocaine into “crack,” redistribute it to gang members and others in the Hill and other neighborhoods. Ogman often cooked the cocaine into crack himself and used drug addicts (or “friends,” as he called them) to test the batches he made.

Trying to get a handle on the drug trafficking and violence being perpetrated by the Grape Street Crips and other gangs, the FBI’s New Haven Safe Streets Task Force—which includes the Connecticut Department of Corrections, the Connecticut State Police, and the New Haven, Hamden, and Milford Police Departments—began to investigate and soon honed in on Ogman and his associates.

For the investigation into Donald Ogman and the Grape Street Crips, Bureau agents and task force officers working side by side used a variety of techniques to uncover the extent of the group’s criminal activity, including court-authorized wiretaps, the execution of search and seizure warrants, electronic and physical surveillance, and confidential informants. Between March and September 2011, law enforcement also set up a series of about 75 controlled drug buys—using confidential informants to purchase cocaine from members and associates of the gang, including Ogman.

The wiretaps on Ogman’s phone were fruitful as well, providing evidence of his leadership of the Grape Street Crips and his involvement in drug trafficking. During one particular conversation he had with an associate, the two discussed a couple of unrelated federal drug investigations in New Haven and mused on the perils of being the target of such an investigation.

Ogman soon found out how perilous it could be. In March 2012, investigators executed a series of search warrants, seizing drugs, drug paraphernalia, cash, firearms, ammunition, and other items. Ogman was charged and taken into custody, as were a number of his fellow gang members and associates. In March 2014, he pled guilty to drug conspiracy charges prior to his sentencing.

And not long after Ogman was taken into custody and his criminal enterprise was virtually dismantled, New Haven police reportedly noted a reduction in crime in the neighborhood areas where the Grape Street Crips operated.

The Buckeye Bandit wanted by the FBI.