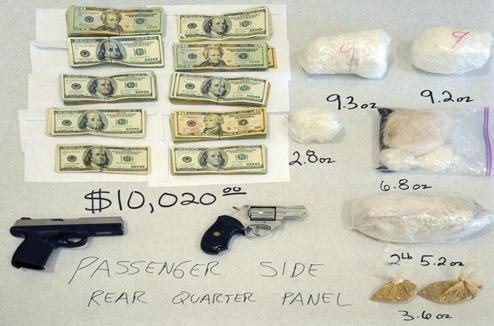 The cash, weapons, and drugs seized from a hidden compartment in the so-called “trap car” used by California drug trafficker and gang leader Luis Manual Tapia.

But after an extensive investigation by the Ventura County Violent Crimes Task Force—made up of FBI agents and officers from the Oxnard and Ventura Police Departments—Tapia, 39, was convicted by a federal grand jury in Los Angeles and sentenced last month to six life terms without parole plus an additional 55-year consecutive term. Four other key Colonia Chiques members and associates who were charged with Tapia previously pled guilty. (A fifth person charged is a fugitive believed to be in Mexico.)

The Colonia Chiques became the focus of the Ventura County Violent Crimes Task Force because of the vast number of violent crimes committed by its members and because of the group’s alignment with the extremely violent Mexican Mafia, a powerful gang within the California prison system. In return for helping the Mexican Mafia carry out its illegal activities (involving drugs, weapons, etc.) inside and outside prison walls, Hispanic gangs like the Colonia Chiques who align themselves with the Mexican Mafia get a cut of the group’s illegal profits and are promised protection when their members find themselves behind bars. Tapia’s relationship with the Mexican Mafia helped him import high-quality, often deadly drugs from Mexico.

In Ventura County and surrounding areas, Colonia Chiques members were involved in a wide variety of violent and serious crimes—murders, attempted murders, drive-by shootings, assaults with deadly weapons, drug trafficking, firearms trafficking, robberies, burglaries, and car thefts. The level of violence they perpetrated made the public fearful to report crimes committed by the gang, testify against Colonia Chiques members, and visit areas of town frequented by gang members.

At the center of it all was Tapia, leading, directing, and managing his criminal enterprise and his crew. Tapia, in an acknowledgement of his lynchpin role, was once overheard boasting, “I know how it feels to be a CEO.” But by combining the efforts and the expertise of the Bureau, our partners on the task force, and federal prosecutors, we were able to knock Tapia out of his perch and do serious harm to his organization.

The jury at Tapia’s trial heard a lot about the activities of the Colonia Chiques—much of it from Tapia himself in the form of audio and video recordings captured by law enforcement. For instance:

Confidential informants provided us with a wealth of critical information on Tapia. We also used undercover scenarios against him and his group—one in particular where an FBI agent posed as a senior member of the Italian Mafia and negotiated to have Tapia supply the Las Vegas syndicate of the Mob with a monthly supply of methamphetamine.

By the end of the trial, members of the jury were convinced enough to convict him on all 26 charges.

The prosecutions of Tapia and his associates are part of a larger joint effort by law enforcement to target the Colonia Chiques and other Ventura County street gangs affiliated with the Mexican Mafia. In 2011, a total of 11 gang defendants were convicted in federal court and received sentences of up to 25 years each. And in November 2013, 17 more gang members were charged with drug distribution.

As a result of these actions, the streets of Ventura County are a little safer these days.

The case of a pastor who embezzled nearly $1 million from his community center.