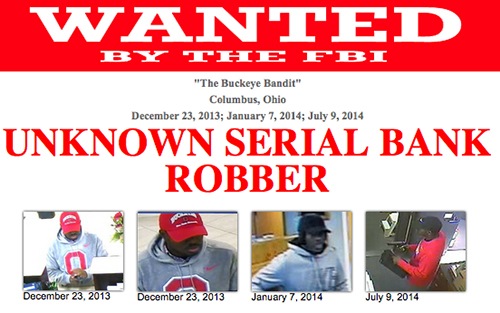 The FBI—along with its partners at the Columbus Police Department, Franklin County Sheriff’s Office, and Bureau of Alcohol, Tobacco, Firearms, and Explosives—are appealing again to the public for assistance in finding a serial bank robbery suspect believed to be responsible for at least 20 Columbus-area robberies between 2013 and 2015.

Referred to as the Buckeye Bandit because he is often seen wearing Ohio State University apparel, the suspect has displayed a handgun during many of the robberies and should be considered armed and dangerous. He is also suspected of robbing a Columbus pharmacy three times.

A reward of up to $5,000 is being offered by the FBI for information that leads to the identification, arrest, and conviction of the robbery suspect. Crime Stoppers of Central Ohio is also offering an additional $2,000 reward. Anyone with information can call the FBI’s Buckeye Bandit tip line at (614) 849-1896.