The Risks to the Thin Blue Line 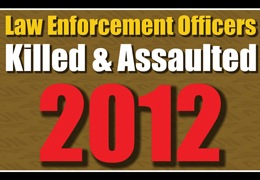 A Florida detective was shot and killed while investigating a residence believed to house a meth lab. An Arizona deputy sheriff lost his life responding to a burglary alarm at a business. A Washington state park ranger was shot and killed after she attempted to conduct a traffic stop.

These three law enforcement officers were among the 48 officers around the nation who died in 2012 as a result of felonious incidents in the line of duty, according to the FBI’s latest Law Enforcement Officers Killed and Assaulted (LEOKA) report. All 48 officers would have undoubtedly considered their actions a part of the job. But the duties performed by these brave men and women—and others just like them—are far from routine, and this latest report continues to highlight the risks law enforcement officers face on a daily basis.

Among the report’s findings:

LEOKA’s overall goal is to reduce law enforcement deaths and assaults. By providing agencies with detailed descriptions of circumstances leading to officer fatalities and injuries every year, police training programs can be continuously enhanced to help officers stay safe during similar situations.

Beyond publishing the LEOKA report, the FBI has other initiatives that are designed to help protect law enforcement. For example:

Law enforcement will always be a dangerous profession, but enhanced training and awareness will better protect those who join its ranks.

Attorney Turned Racketeer a ‘Stunning’ Betrayal of the Law

The case of a New Jersey attorney whose criminal enterprise rivaled that of a mob boss.

Story about a fraud ring in California.