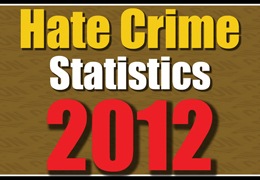 The FBI has just released its hate crime statistics report for 2012, and the numbers show that we as a nation still have a way to go toward alleviating these crimes that have such a devastating impact on communities.

The data contained in Hate Crime Statistics, 2012 is a subset of the information that law enforcement submits to the FBI’s Uniform Crime Reporting (UCR) Program. The full hate crime report can be viewed on our website, but here are a few highlights: 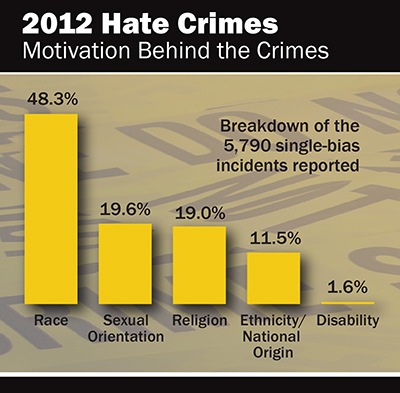 Beginning in January of this year, new UCR data collection methods were enacted, allowing law enforcement to get even more specific when submitting bias motivation information. For example, as a result of the Matthew Shepard and James Byrd, Jr. Hate Crime Prevention Act, agencies can now report on crimes motivated by “gender identity” bias and “crimes committed by, and crimes directed against, juveniles.” And a federal directive enabled our UCR Program to expand and/or modify its data collection categories for race and ethnicity. (This enhanced 2013 hate crime data will be published in 2014.)

In addition to our annual hate crime report—published to help provide a more accurate accounting of the problem—the FBI is the sole investigative force for criminal violations of federal civil rights statutes. As a matter of fact, hate crime is the number one priority in our civil rights program, and we opened some 200 hate crime investigations during 2012.

But in addition to our investigations, we also work closely with our state and local partners on their investigations—offering FBI resources, forensic expertise, and experience in identifying and proving hate-based motivations. We participate in hate crime working groups around the country to help develop strategies that address local problems. And we conduct training for local law enforcement, minority and religious organizations, and community groups to reduce civil rights abuses.

Since its inception in 1998, the NICS has processed more than 177 million background checks requested by gun sellers, or federal firearms licensees (FFLs).