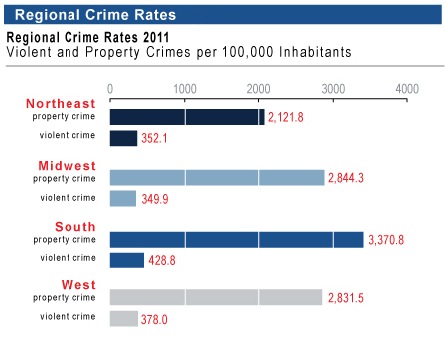 The FBI’s Uniform Crime Reporting (UCR) program is one of two statistical programs administered by the Department of Justice that measure the magnitude, nature, and impact of crime—the other is the National Crime Victimization Survey (NCVS), conducted by the Bureau of Justice Statistics.

Both were designed to complement each other, providing valuable information about aspects of the nation’s crime problem, but users should not compare crime trends between the two programs because of methodology and crime coverage differences. The UCR program provides a reliable set of criminal justice statistics for law enforcement administration, operation, and management, as well as to indicate fluctuations in the level of crime, while the NCVS provides previously unavailable information about victims, offenders, and crime…including crimes not reported to police. Additional information about the differences between the two programs can be found in the Nation’s Two Crime Measures section of Crime in the United States.

Looking ahead to 2013 and beyond, the UCR program is working to complete the automation of its data collection system, which will result in improved data collection efforts with new offense categories and revised offense definitions…as well as a faster turnaround time to analyze and publish the data. And beginning with the 2013 data, the new definition for rape will take effect—the FBI is developing options for law enforcement agencies to meet this requirement, which will be built into the new data collection system.

UCR’s Law Enforcement Officers Killed and Assaulted, 2011 and Hate Crimes Statistics, 2011 will be available on our website later this fall.

With eight kids under the roof, the Dixons’ one-bathroom house in Pittsburgh had no room for the mitts, hockey sticks, and other accoutrements of active all-weather children. So everything was kept on the front porch. When things went missing, nobody was surprised when Martha, the sixth child and a future FBI special agent, initiated her own stake-out, sleeping on the porch and nabbing the culprit red-handed. It was the paperboy.