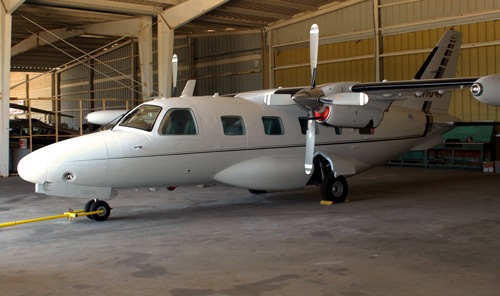 Nicodemo “Nicky” Scarfo, Jr. and his La Cosa Nostra associate Salvatore Pelullo used some of the millions they illegally siphoned from FirstPlus Financial Group Inc. to buy this airplane.

In a world inhabited by international cyber criminals and violent terrorists, it would be easy to think of La Cosa Nostra—the Mafia—as a throwback to a bygone era. But a recent New Jersey case involving the Lucchese crime family is proof that traditional organized crime can still be a potent threat.

Members and associates of the Lucchese organized crime family—one of the families traditionally associated with La Cosa Nostra (LCN)—were recently sentenced to lengthy prison terms in New Jersey for a financial fraud scheme that illegally netted millions of dollars.

Nicodemo “Nicky” Scarfo, Jr., whose imprisoned father was an LCN crime boss in Philadelphia, was sentenced in July to 30 years in prison for racketeering, securities and wire fraud, and other charges related to the 2007 illegal takeover of FirstPlus Financial Group Inc. (FPFG), a publicly held company in Texas. His associate, Salvatore Pelullo, also received a 30-year term. Brothers William and John Maxwell received 20- and 10-year terms, respectively.

“Essentially, Scarfo and Pelullo used extortion and other illegal means to gain control of the company,” said Special Agent Joe Gilson, who investigated the case from the FBI’s Atlantic City Resident Agency in New Jersey. “And then they systematically looted the company.”

FPFG, once a billion-dollar financial organization that specialized in mortgages, had filed for bankruptcy. The company was dormant, said Special Agent Bill Hyland, who assisted in the investigation, “but still had assets, thanks to the continued proceeds from all the mortgages it had financed.”

In 2007, Pelullo and Scarfo used threats and other tactics to intimidate and remove FPFG’s management and board of directors. They were replaced with Mafia associates, including the Maxwell brothers—William was named special counsel to FPFG, while John became the company’s CEO.

“Within several weeks of gaining control,” Gilson said, “Pelullo and Scarfo had lined their pockets with $7 million. Before they were arrested in 2011, more than $12 million was illegally funneled to them—money that rightfully belonged to the company’s stockholders.

The investigation revealed that between 2007 and 2008, Scarfo received $33,000 per month from FPFG as a “consultant”—at a time when he was on home detention in New Jersey for violating his parole from a previous conviction. The money was being paid to a shell company controlled by Scarfo. Pelullo, using a different shell company, had a similar deal. With their ill-gotten gains, the mobsters purchased an airplane, a yacht, and expensive jewelry.

“Complicated financial crimes are not normally the strong suit of LCN,” Gilson noted. But Pelullo, who had two previous federal fraud convictions, “was a persuasive con man. He could maintain an air of legitimacy, but behind the scenes everything was a fraud.”

Using a variety of investigative techniques, including a court-ordered wiretap (monitored by retired FBI agents, some of whom had helped put Scarfo’s father behind bars), investigators unraveled the scam with the help of federal partners including the Department of Labor and the Bureau of Alcohol, Tobacco, Firearms, and Explosives. During the more than five-year investigation, a million pages of paper documents were analyzed and the contents of more than 100 computers were searched.

Scarfo, Pelullo, the Maxwells, and others associated with the fraud were convicted in 2014. “We feel great that our team was able to put a stop to these crimes and bring the subjects to justice,” Gilson said. “The FBI remains vigilant against all types of organized crime, including LCN.”

A reward of up to $25,000 has been put forth for information leading to arrests and prosecutions in the murder of Aya Nakano, who was gunned down on June 12, 2013.

A man who advertised illegal anabolic steroids online will be serving time in prison.