Part 3: Murder on the Zuni Reservation 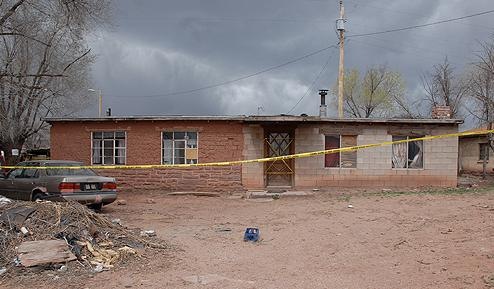 Floyd Yuselew killed his friend in this house on the Zuni Reservation during a confrontation after a night of drinking in 2009. The victim’s body was found months later, still well-preserved by the winter freeze.

Special Agent John Fortunato walked behind the abandoned house on the Zuni Reservation in western New Mexico and pointed out where Floyd Yuselew dug a grave to bury the friend he had murdered with an ax to the head.

The two had been drinking, and investigators believe the murder was committed because Yuselew thought his buddy had been flirting with his girlfriend. When tribal police and the FBI learned of the crime in March 2009, they found the victim still sitting in the chair where he had been killed months earlier. Because the house was unheated throughout the cold winter, the body—and the crime scene—had been perfectly preserved.

Uncertain what to do with the body, and not wishing to live in his house with a corpse, Yuselew and his girlfriend moved in with friends. Periodically, he returned to dig in the frozen backyard to make a grave. Later, Yuselew was afraid his girlfriend would turn him in for the murder when their relationship ended badly, so he called the Zuni police, told them about the body, and tried to pin the crime on her.

As unusual as the case may seem, in many ways it is a common Indian Country crime: a tragic killing successfully investigated and prosecuted thanks to the strong relationships between tribal authorities, the FBI, and federal prosecutors. Criminal jurisdiction in Indian Country is a complicated web of tribal, state, and federal rules. The sovereign status of many tribes precludes most states from exercising jurisdiction. Instead, that authority resides with the tribes, but only for non-felony offenses. It is the FBI’s responsibility to investigate major crimes such as murder, and tribal authorities rely on the muscle of the federal judicial system to prosecute those crimes to the fullest.

“By law these major crimes are federally prosecuted, and the FBI is the vehicle for getting them to federal court,” said Special Agent Mike Harrigan, who supervises a squad of Indian Country investigators. “But the successful investigation of such crimes isn’t just a Bureau role,” he added, “it is a tribal and Bureau partnership.”

“We have a close relationship with all the tribal police,” Fortunato said. “It would be difficult for us to do our jobs without that partnership, and they depend on us as well.” In the Yuselew case, for example, Fortunato called in the Bureau’s Evidence Response Team (ERT) to help work the crime scene.

“When ERT processed the scene,” he explained, “there was a lot of blood and other evidence, like alcohol cans we were able to pull fingerprints from. The blood spatter and other evidence inside the house made it clear it was not the girlfriend who did the crime.”

In the end, Yuselew pled guilty to second-degree murder and is currently serving a 17-year sentence. The case is one of many senseless crimes Fortunato and his colleagues investigate in Indian Country. “We invariably see the bad side of things here,” he said. “We are constantly seeing tragedy, loss, and people who hurt family members. That is the hardest thing for me about working in Indian Country.”

Still, Fortunato is pleased that justice was served in the Yuselew case, and he believes in the goodness of the vast majority of Native Americans. “Anyone who has visited the Navajo and Zuni reservations and spent time here will tell you that most of the people are terrific, very friendly, and welcoming.”

The FBI plays a unique role in Indian Country, said Special Agent Mike Harrigan. “In other jurisdictions, the Bureau doesn’t generally work violent crimes the way we do in Indian Country. In other places in the U.S. we investigate selected instances of violent crimes, maybe if there is an interstate aspect, for example. But here in Indian Country we have exclusive federal jurisdiction, which makes us the primary investigators for homicides and sexual assaults—almost like first responders. In most other places, we just don’t have that federal authority.”

Criminal jurisdiction on tribal lands also varies depending on the reservation and the state in which it is located, Harrigan added. “Sometimes it’s Bureau of Indian Affairs investigators who have jurisdiction on behalf of the tribes. Here in New Mexico,” he said, “generally the tribes have their own police departments. They get funding from the federal government for law enforcement. The FBI works with their criminal investigators who are trained to federal standards.”

In October 2009, college student Morgan Harrington left a Metallica concert at the University of Virginia in Charlottesville and disappeared. It would be several months before her body was discovered in a field about 10 miles away.