Smash and Grab Jewelry Store Incidents are on the Rise 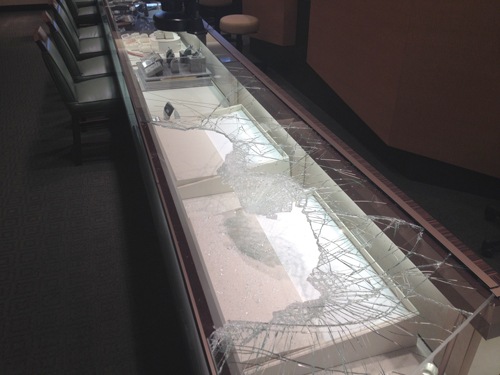 Today, the FBI and its partners announced three separate indictments filed during the past month against 17 individuals from the metropolitan Detroit area who are believed to be responsible for a number of “smash and grab” robberies of jewelry stories in a half-dozen states. The charges, filed in federal court in the Eastern District of Michigan, involved violations of the Hobbs Act, which makes it a crime to obstruct, delay, or affect interstate commerce by robbery.

The indictments follow a series of investigations around the nation by various local, state, and federal law enforcement agencies involving approximately 40 smash and grab jewelry store robberies. Authorities also announced they are looking for the public’s help in identifying 16 other individuals believed to be connected to additional smash and grab robberies (see Seeking Information poster below).

Smash and grab robberies are aptly named—they involve perpetrators who enter a jewelry store and, in front of store employees and customers alike, threateningly whip out tools like sledgehammers, smash those hammers through the glass displays, and grab expensive pieces of jewelry before taking off, stunning and frightening anyone who witnesses their actions. In addition to the constant threat of violence from these criminals, there have been instances of innocent bystanders actually getting hurt during these robberies.

And unfortunately, these types of robberies around the nation have recently increased at an alarming rate. According to the Jewelers’ Security Alliance (JSA)—a non-profit group that provides crime information and assistance to the jewelry industry and law enforcement—there were 110 smash and grabs during 2014, nearly twice the number (62) reported during 2013.

And once the jewelry is stolen, it’s relatively easy to transport it to whichever fence the criminals do business with so it can be quickly sold for cash—which can then be used to fuel other crimes the groups may be committing.

At first glance, these robberies seem like local crimes, so why is the FBI even involved? For several reasons: First, because often times, the stolen merchandise crosses state—and sometimes national—borders, so a federal law enforcement agency with offices around the nation and even overseas is vital; second, because the robberies are being increasingly committed by organized criminal enterprises that operate in multiple jurisdictions; and lastly, because these crime groups are often involved in other kinds of organized crime activity that the FBI is already investigating.

But of course we can’t—and don’t—do it alone. The investigation that resulted in the Detroit indictments was conducted by the multi-agency, FBI-led Oakland County Gang and Violent Crime Task Force and involved coordination among multiple Bureau field offices, state and local law enforcement agencies around the country, and our private partners in the jewelry industry. That coordination—the sharing of vital information, methods of operation, and evidence—is what allowed us to link the robberies to the same criminal crew.

Explains John Kennedy, head of the Jewelers’ Security Alliance, which represents the interests of 21,000 retail jewelry stores, “It’s very difficult for a local agency to address the problem by itself, but when the FBI—with its national and international scope—assists, the overall law enforcement effort is more effective.” The JSA also plays a key role in these investigations by offering law enforcement agencies access to its database of jewelry and gem thefts.

The fallout from these smash and grab robberies can be seen across the board. Obviously, store employees and customers are traumatized when faced with the threat of violence. Jewelry stores suffer tremendous losses, as do the insurance companies who must pay the resulting claims. Stores also spend additional money to enhance their security measures—hiring security guards, upgrading the strength of their display cases, installing or augmenting video monitoring equipment, etc. And eventually, over time, the fallout could hit the public at large, with higher insurance costs and higher prices at the jewelry store.

But by combining the most effective resources, tools, and expertise, law enforcement and prosecutors—along with our private sector partners—are teaming up to identify those responsible for these violent crimes and put them behind bars.

Our state and local partners played a vital role in this Detroit investigation into a criminal enterprise allegedly engaging in a series of smash and grab jewelry store robberies. But that’s nothing unique—on daily basis, the FBI works with our state and local partners around the country on all sorts of criminal and national security cases. Here are some reflections on the importance of law enforcement cooperation from several of the agencies involved in the Detroit case.

“When violent acts like these are committed in places where families shop and do other business, it becomes even more imperative to get these suspects behind bars. We’re working with other partner agencies to capture these individuals who are jeopardizing the safety of Loudoun residents, and to prevent future confrontations with the public.”

“It’s the goal of the Michigan State Police to work collaboratively with our law enforcement partners, and these types of crimes [smash and grabs] have the potential to be violent, which impacts public safety. We are proud to be a part of this investigation which will make our citizens feel safe again during their daily routines.”

“Joining our resources with those of the FBI has enhanced our effectiveness by allowing their long-arm jurisdictional reach to cross state lines in pursuit of these dangerous criminals. Our partnership with the Bureau has resulted in a more effective consolidated quest to arrest and prosecute these violent perpetrators.”