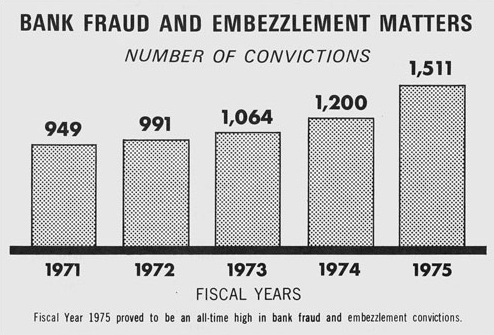 In the 1970s, financial fraud cases began to rise, as shown in this excerpt from the 1975 annual report.

Charles Bonaparte was clearly onto something.

Over our first six or seven decades, the financial crimes we investigated were fairly small potatoes by today’s standards. There were plenty of them, to be sure. Like the “Lady with the Big Heart” who embezzled some $150,000 from her bank in Trenton, New Jersey in the 1940s and used the stolen loot to pick up dinner tabs and buy expensive gifts for herself and her friends. Like the New York City music producer who convinced an investor to give him $35,000 in 1942 to finance a Nutcracker ballet movie, only to pocket the money and file for bankruptcy. And like Frank Abagnale of Catch Me If You Can fame, who as a teenager began passing bad checks across the nation and eventually around the world before being arrested in France in 1969 and landing in a U.S. federal prison in 1971.

Financial crime became a pressing priority in the mid-1970s, when Director Clarence Kelley made white-collar crime—which in the fallout of Watergate included public corruption—a top focus of the FBI. By 1976, Director Kelley noted that 15 percent of our agents were working white-collar crime cases, and the next decade saw the beginning of a wave of agent-intensive, high-dollar, and high-impact financial fraud investigations with our partners that continues to this day. A few examples:

The threat remains…and our work goes on. As evidenced in our latest Financial Crimes Report—buttressed by last week’s conviction of Robert Allen Stanford, who misappropriated $7 billion from his own company—we continue to address the threat of financial fraud…everything from insider trading to insurance fraud, from mortgage fraud to bank failures, from mass marketing scams to health care and corporate fraud.

An Albuquerque man who devotes his time to educating his community about cyber threats. A Jacksonville woman whose child protection group assists law enforcement with crimes against children investigations.

Accountants have been woven into the fabric of the FBI since its creation in the summer of 1908, when a dozen bank examiners were included among the original force of 34 investigators.