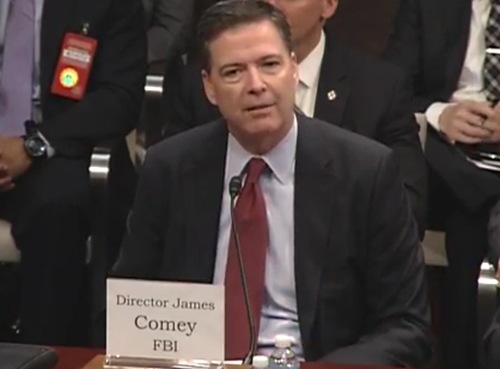 FBI Director James Comey answers questions from members of the U.S. House Permanent Select Committee on Intelligence during a hearing on worldwide cyber threats on September 10, 2015.

According to Clapper, cyber threats to the U.S. are increasing in frequency, scale, sophistication, and severity of impact, and nearly all information communication technologies and information technology networks and systems are at risk. “These weaknesses,” he explained, “provide an array of possibilities for nefarious activity by cyber threat actors.” The cyber threat actors include nation-states like Russia and China and non-nation-state entities like profit-motivated criminals and ideologically motivated hackers and extremists. And their activities include remote hacking intrusions, insertion of compromised hardware or software in supply chain operations, malicious actions by insiders, and taking advantage of human mistakes by system users.

Clapper highlighted examples where “our federal law enforcement colleagues continue to have successes capturing key cyber criminals.” One of the investigations he mentioned involved an FBI-led coalition of international partners from 20 countries that dismantled an online criminal forum called Darkode this past July.

In addition to Clapper and Comey, the other officials who appeared before the House Permanent Select Committee on Intelligence today were the directors of the Central Intelligence Agency, National Security Agency, and Defense Intelligence Agency—John Brennan, Admiral Michael Rogers, and Lieutenant General Vincent Stewart, respectively.

A reward of up to $25,000 has been put forth for information leading to arrests and prosecutions in the murder of Aya Nakano, who was gunned down on June 12, 2013.