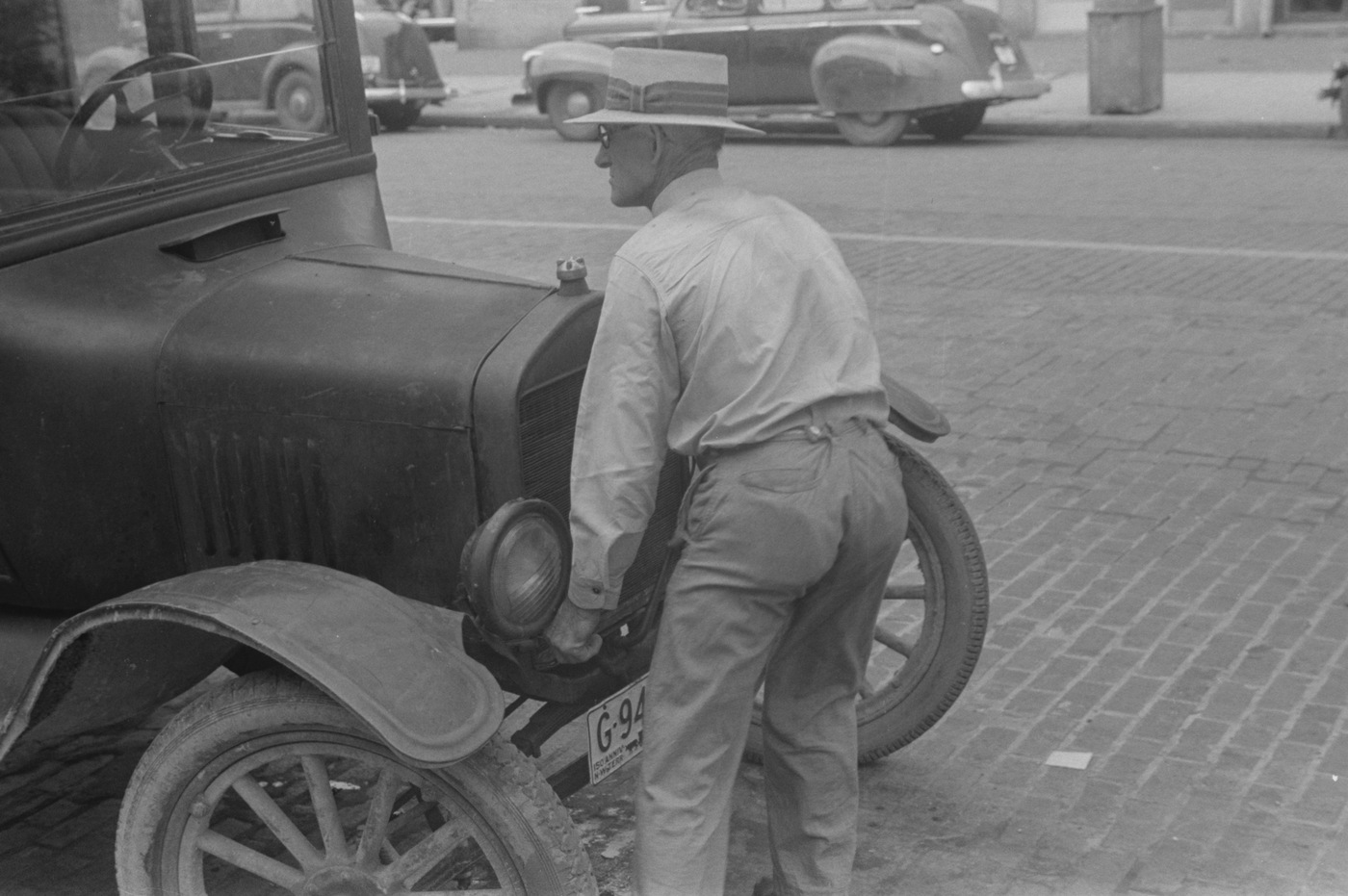 A man works on a 1938 Ford Model T. The widespread adoption of autombiles led to the Dyer Act, passed 100 years ago this week, which made interstate vehicle theft a federal crime. (Library of Congress photo)

On August 12, 1908, the first Model T rolled off the assembly line at Henry Ford’s plant on Piquette Avenue in Detroit, Michigan.

The arrival of the Model T, a mechanical marvel of its time, ushered in a new era of reliable, affordable transportation and travel for the American people.

It also launched a new wave of crime.

In these early days, cars were easy to steal. Few had built-in locks. Ignitions were primitive and easy to hotwire. Vehicle identification numbers didn’t exist. Owners often left their automobiles out in the open or parked for hours on busy streets as they went about their days.

As car sales exploded, so did automobile thefts. Professional gangsters, insurance scammers, petty thieves, and even kids looking for a joy ride all got in on the action. By 1918, more than 27,000 motor vehicles were being stolen each year in 28 of the nation’s largest cities.

Cars quickly became enablers of crime, too. They made it much easier for crooks to rob banks, transport stolen goods, kidnap women and children, and evade police simply by crossing jurisdictions or state lines.

In 1919, Congress took action. Leonidas C. Dyer of Missouri introduced a bill to make transporting stolen automobiles across state lines a federal crime. Congress passed it on October 29, 1919, 100 years ago this week.

Known as the Dyer Act or the National Motor Vehicle Theft Act, the law was a game changer not just for local and state police but also for a young national investigative force that had been created just 18 days before the first Model T rolled off the Ford production line.

The Bureau of Investigation, as the FBI was called then, realized that the Dyer Act would become a key tool in fighting crime and protecting communities by providing an important new jurisdictional hook in cases once reserved for local and state authorities. The widespread adoption of cars helped nationalize the threat of crime, which led to the growth of the FBI into what it is today.

At first, enforcement of the law proved difficult. Since the Model T was so common, it was often hard to distinguish stolen cars. Central collections of registration information were only just developing. Part numbers and other unique identifiers were easily rubbed out. And with demand soaring, a ready market existed for “discounted” automobiles.

Fortunately, the Bureau had key allies in the battle. State and local police were also on the hunt for auto thieves and worked hand-in-hand with agents. Auto insurance companies and their private detectives were major partners as well.

The widespread adoption of cars helped nationalize the threat of crime, which led to the growth of the FBI into what it is today.

In the first two decades of the Dyer Act, the FBI recovered more than 56,000 motor vehicles valued at $32 million.

The law proved useful in other ways. Many captured car thieves were military deserters or fugitives from justice. Others were engaging in human trafficking. Breaking organized auto theft rings also helped put dangerous thugs and mobsters behind bars.

The work was not without risks. On October 11, 1925, Special Agent Edwin C. Shanahan was shot and killed in a Chicago garage by a professional car thief named Martin Durkin. It was the first murder of a Bureau agent in the line of duty. Durkin was eventually captured with the help of an insurance company detective.

The Dyer Act was especially vital in the 1930s, enabling the FBI to join the hunt for notorious gangsters such as John Dillinger, Pretty Boy Floyd, and Bonnie and Clyde and leading to some of the Bureau’s most significant and memorable cases.

In March 1934, for example, Dillinger broke out of a jail in Crown Point, Indiana. Following his escape, he stole the sheriff’s car and drove it across state lines to Chicago, violating the Dyer Act. That made Dillinger a federal fugitive and an FBI subject. Bureau investigators began tracking him closely. Agents cornered and killed Dillinger less than five months later.

At the same time, the Bureau began developing scientific and technical tools to aid in curbing car thefts. When the FBI Laboratory was created in 1932, for instance, car tire treads and auto paint samples were two of the first collections initiated. These collections have proven invaluable in identifying cars involved in criminal activity and solving a countless number of cases over the years.

And today? The FBI’s most recent crime statistics show that an estimated 748,841 motor vehicles were stolen nationwide in 2018, resulting in more than $6 billion in losses. With the help of legislative tools like the Dyer Act, the FBI and its partners remain fully committed to countering this pervasive crime threat and bringing thieves to justice.

A man who broke into a California zoo after hours and stole an endangered ring-tailed lemur—the oldest in captivity in North America—will be spending time in prison.