On December 14, 1969, a young single mother named Diane Maxwell Jackson arrived for her shift as a Southwestern Bell telephone operator in Houston. After parking her car in the company lot, she was forced into a nearby shack by an unknown individual and brutally raped, strangled, and stabbed to death. After a thorough investigation by the Houston Police Department (PD), no suspects were identified, and the latent prints lifted from the outside of the victim’s car were filed away.

Decades later, assisted by advances in technology and interest from the victim’s brother, the case was reopened and ultimately solved. And most recently, the Houston PD detective and Texas Department of Public Safety latent print technician so instrumental in the outcome were honored by the FBI with the 2011 “Latent Hit of the Year” Award.This award is given out annually for a latent print identification made after a search of our Integrated Automated Fingerprint Identification System (IAFIS) that results in a conviction for a major violent crime. IAFIS is a national fingerprint and criminal history system that responds to requests from our partners and our own investigators to help solve and prevent crimes and terrorism. It currently houses the fingerprints of more than 70 million criminal subjects. 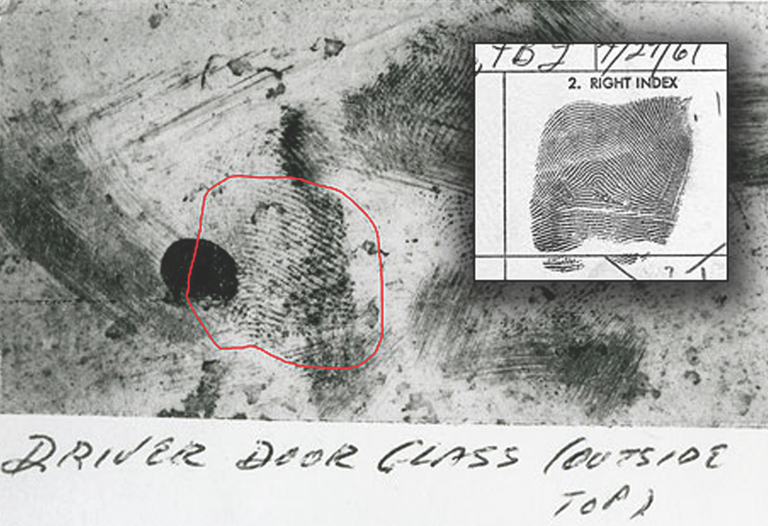 A latent print removed from the victim’s car was determined to be a match to the suspect’s
fingerprint (inset) contained in IAFIS.

Houston case background: Years passed after Jackson’s murder, and with no new leads, the case went cold. But in 1989, David Maxwell, the victim’s brother, began reviewing the file on his sister’s death. Maxwell reconsidered his plan to become a lawyer after his sister died and instead joined the Texas State Highway Patrol and later the Texas Rangers. He asked the Houston PD to review the original evidence and witness reports for any new leads. A Houston newspaper ran an article publicizing the murder and requesting assistance from the public. At the same time, the Houston PD began a search for the latent prints lifted from the victim’s car.

Once located, the prints were searched against the Houston PD’s local fingerprint database and the Texas Department of Public Safety’s Automated Fingerprint Identification System. Neither searched yielded a positive ID. 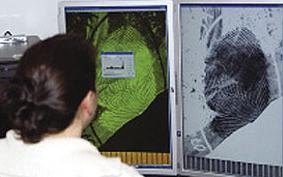 It’s an impression—usually invisible to the naked eye—left on crime scene evidence that’s produced by the ridged skin on human fingers, palms, or soles of the feet. A variety of techniques, including using chemicals, powders, lasers, and alternate light sources, are employed in the detection and development of latent prints. These prints are then routinely searched through local and state fingerprint databases to find a match. If those searches aren’t successful, the prints can also be submitted to the FBI’s Integrated Automated Fingerprint Identification System (IAFIS).

Latent Hit of the Year Videos

On July 23, 2003, Texas Department of Public Safety Latent Print Technician Jill Kinkade prepared the prints for a search of the FBI’s IAFIS. In less than five hours, the system returned a response containing 20 potential matches, and Kinkade determined that the latent print evidence was a match to the number one candidate—James Ray Davis.

Honing in on a suspect. Investigators discovered that Davis had been arrested for various crimes before and after Diane Maxwell Jackson’s murder—in fact, he had just finished a prison term nine days before the murder.

Learning about the latent print identification of Davis, Houston PD Sergeant James Ramsey—the case’s lead investigator—quickly located the suspect living along the Texas-Arkansas border. Investigators knew that because his fingerprints were recovered from the outside of the victim’s car, they would likely need a confession in order to get a conviction, After being presented with the forensic evidence and photographs of the crime scene, Davis admitted to the crimes.

He pled guilty in court, and on November 24, 2003, 34 years after the homicide, James Ray Davis was sentenced to life in prison for the rape and murder of Diane Maxwell Jackson.

An updated museum exhibit contains 60 artifacts from the 9/11 investigation.