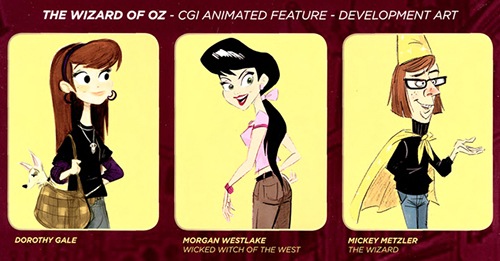 Development art depicting characters in the movie OZ3D—an animated version of the Wizard of Oz—which was never made by Gigapix Studios even after hundreds of victims were lured into investing millions of dollars in the project.

The owners of Gigapix Studios told investors they had a sure thing: They were going to make an animated version of the Wizard of Oz called OZ3D, and those who got in on the ground floor—and the company’s imminent public offering—could make a killing.

Unfortunately, the film was a bigger fairy tale than investors bargained for, and approximately 730 people lost millions of dollars. For some, the investment represented their life savings.

“Potential investors were told, ‘You’re going to make so much money that your kids and grandkids won’t want for anything,’” said Special Agent Eric Potocek, who investigated the case out of our Los Angeles Division. “In the end, the movie was never made, and it is unlikely investors will ever get anything back.”

Between the film and the impending public offering, the two principal fraudsters behind Los Angeles-based Gigapix raised some $21 million over a seven-year period beginning in 2006. Of the $8 million raised for the movie, only 5 percent of that amount went toward actually producing a film. The rest was used to pay big salaries, commissions, overhead for a fancy office, and other expenses.

Christopher Blauvelt, 59, and David Pritchard, 67, were convicted in 2014 on a series of federal charges including mail fraud, wire fraud, and offering unregistered securities for sale. Last month, Blauvelt was sentenced to eight years in prison, and Pritchard received a five-year term.

Blauvelt founded Gigapix in 2002 and brought Pritchard on as a partner four years later. The two hired telemarketers to solicit potential investors, who were told that Gigapix was a blockbuster animation company waiting to happen—similar to Pixar Animation Studios—and that Gigapix was developing projects expected to generate huge profits when the company went public.

The telemarketers—known as “fronters”—used marketing lists to cold call potential investors and worked from scripts touting the supposed merits of Gigapix. When victims expressed an interest in investing, they were turned over to “closers” who collected their money. Two of the company’s closers were also convicted in the fraud.

While soliciting money for Gigapix and OZ3D, the defendants told lies and half-truths, suggesting that the company was financially successful and investors would receive high returns on their investments in less than 18 months. They claimed that investments carried little or no risk.

Some of the victims were “savvy investors,” Potocek noted, and perhaps could afford to lose what they risked. But many victims—referred by friends or other investors and who lived far away from Hollywood—were susceptible to the sales pitch and the lure of being part of the film business.

“Many of the victims were not wealthy people,” Potocek said. “They were teachers and secretaries and folks who worked 30 or 40 years to save for retirement.” He added that Gigapix “took money from older people and from others who clearly could not afford to lose it. People lost their homes and had their dreams of retiring evaporate.”

There have been other recent cases in Los Angeles involving movie fraud, where telemarketers lure victims into investing in films that never get made. “These criminals were selling entertainment,” Potocek said, “but it could just as easily have been stocks or precious metals. When someone promises a high rate of return in a very short time, and with little or no risk, any investor should beware. Those are very large red flags.”

The Buckeye Bandit wanted by the FBI.