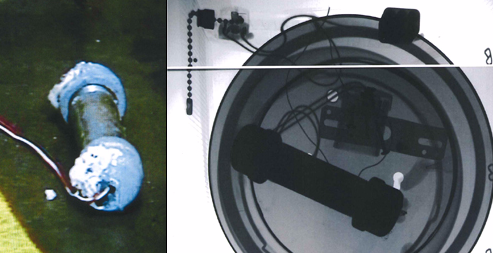 The explosive device, left, found inside a light fixture box at a Home Depot store in Long Island, New York. An X-ray shows the device inside the actual light fixture.

It was one of those cases like you might see on TV or in the movies—where the FBI and its partners work feverishly behind the scenes, racing to stop bombs from going off and lives from possibly being lost.

But this was real—and the stakes were high. The target was one of the nation’s largest retailers in one of America’s most populated areas. And the day of reckoning was Black Friday, the busiest shopping day of the year.

It all started last October 15, when the Home Depot in Huntington, New York—a town on the north shore of Long Island—received an ominous anonymous note. The sender demanded $2 million or he would “shut down” three Home Depot stores on Long Island the day after Thanksgiving by remotely setting off bombs filled with roofing nails using a cell phone. As proof of his ability to hide a bomb, he said that he had planted a live device in the Huntington store’s lighting department.

The man wasn’t bluffing. Home Depot immediately contacted the Suffolk County Police Department, which found an operational pipe bomb hidden within a light fixture inside a box on a shelf. Bomb techs rendered it harmless through a controlled detonation.

Suffolk County and FBI bomb techs later agreed that if a store employee or customer had come across the bomb and picked it up, it could have exploded. And the device made it clear that the bomb-maker knew what he was doing.

Two days later, the man called Home Depot and repeated his demands. Five days later, the store received a second letter, this time lowering the ransom to $1 million and setting up a “money drop” for October 26.

According to the criminal complaint filed in the case, on the day of the money drop, the bomber intended to be “wired up like a Christmas tree” with “2 devices strapped to a belt and 1 to a neck chain I will be wearing, wired together and attached to a deadman switch in my hand.” The man also stated that “to keep from being shot at a distance,” he intended to place an additional explosive device in a Home Depot store.

But just before the scheduled money drop, the would-be-bomber made a second phone call to Home Depot to call it off…for the time being.

All the while, a multi-agency team of investigators from federal, state, and local law enforcement agencies were compiling a list of suspects and working to narrow it down. A prime suspect soon emerged—Daniel Patrick Sheehan, an employee of the Home Depot store in nearby Deer Park.

On November 7—after using a variety of innovative investigative techniques—law enforcement located and arrested Sheehan in the vicinity of one of the Long Island Home Depot locations. Found in Sheehan’s possession was the cell phone used to make the threatening phone calls to the store.

On June 17, 2013, Sheehan was convicted by a federal jury of extorting his employer and using a destructive device. As then-FBI New York Acting Assistant Director in Charge Mary Galligan said after Sheehan’s arrest, “Whatever his motivation …[Sheenan’s] scheme caused economic loss, was a huge drain on law enforcement resources, and threatened the safety of untold numbers of innocent people, any one of which is unacceptable.”

How a Mexican drug cartel leader used an Oklahoma horse farm to launder millions in illicit.