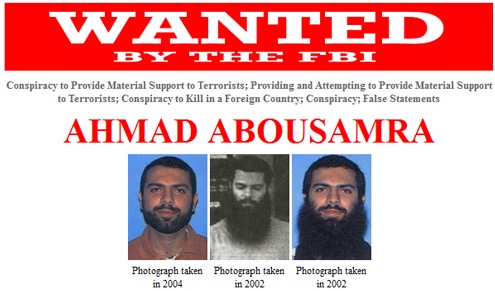 “Knowing that the public is the FBI’s best ally in finding fugitives, today we’re requesting your assistance to locate Abousamra,” said Richard DesLauriers, special agent in charge of our Boston office.

Abousamra is charged with conspiracy to provide material support or resources to al Qaeda. He was indicted in 2009 for taking multiple trips to Pakistan and Yemen in 2002 and 2004 to seek jihad training. He also traveled to Iraq with the hope of joining forces fighting against Americans overseas. Abousamra left the U.S. in 2006 and may be living in living in Aleppo, Syria with his wife, at least one daughter, and extended family.

Abousamra’s co-conspirator, Tarek Mehanna, was convicted of terrorism charges by a federal jury in December 2011 and sentenced last April to 17.5 years in prison.

“Both men were self-radicalized and used the Internet to educate themselves,” said Special Agent Heidi Williams, a member of our Joint Terrorism Task Force (JTTF) in Boston who has been working the case since 2006. “They came to it independently, but once they found each other, they encouraged each other’s beliefs,” Williams said, adding that both Abousamra and Mehanna were inspired by the 9/11 terror attacks. “They celebrated it,” she said.

Abousamra is of Syrian descent and has dual U.S. and Syrian citizenship. He is 31 years old, 5’11” tall, and at the time of his disappearance weighed about 170 pounds. He has dark brown hair and brown eyes. He is fluent in English and Arabic, has a college degree related to computer technology, and was previously employed at a telecommunications company. Abousamra last lived in the U.S. in a prosperous Boston suburb and has family members in the Detroit, Michigan area.

One of his distinguishing characteristics is his higher-pitched voice, which can be heard on our website.

Today’s announcement is part of a publicity campaign employing traditional and social media to seek the public’s assistance. We are using social media to reach an overseas audience—information about Abousamra such as photos and audio clips can be found on the website and our Facebook, You Tube, and Twitter pages.

“Combining the reach and power of multiple media platforms is a powerful way to inform the public about our search,” DesLauriers said. “We believe publicizing Abousamra’s photo and characteristics will lead to a tip about his whereabouts and, ultimately, to his arrest.”

Thomas Daly, a sergeant with the Lowell Police Department in Massachusetts and a task force officer on the Boston JTTF since 2002, said catching Abousamra “will close the chapter on this story. We had two people who were planning to harm U.S. soldiers overseas,” Daly said, referring to Abousamra and Mehanna. “These two were actively radicalizing others. We can only assume Abousamra is still on the same path and remains a threat to our soldiers overseas.”

We need your help. If you have any information regarding Ahmad Abousamra, please contact your local FBI office or the nearest American Embassy or Consulate. You can also submit a tip electronically on our website.

Talk about going from bad to worse—more than 4,000 financially strapped homeowners recently lost at least $7 million to a California business that allegedly operated a loan modification scam. Last month, 11 representatives of that company were federally indicted, but by that time, many of the victims had already lost their homes.