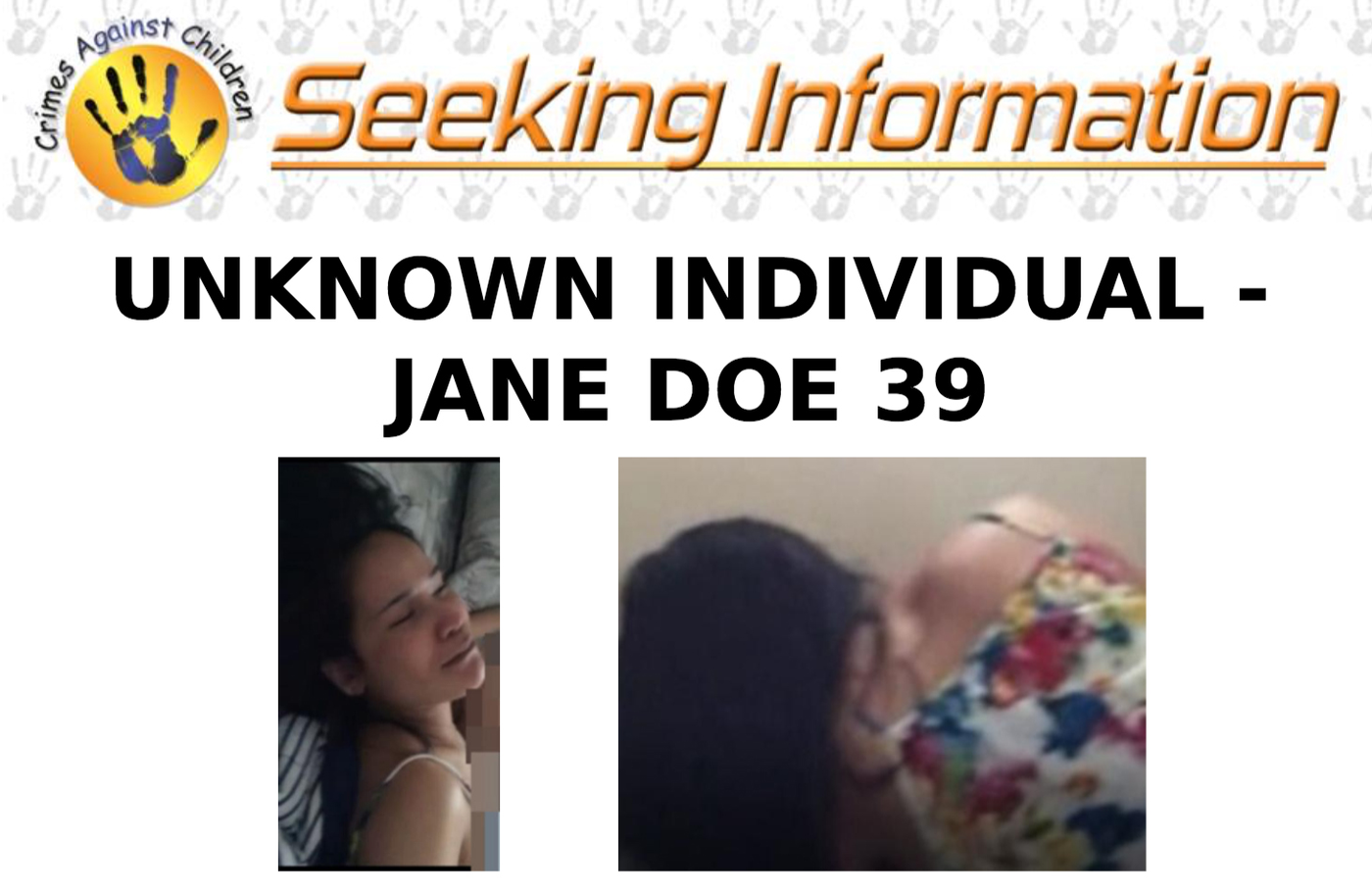 The FBI is seeking the public’s help to stop a child predator.

The unidentified woman being sought—known only as Jane Doe 39—can be seen in a video with a child who is being sexually exploited.

The video was obtained during an FBI investigation and forwarded to the National Center for Missing & Exploited Children (NCMEC), an organization that works closely with the Bureau to stop child predators. Further investigation revealed that the images have surfaced elsewhere online, said Special Agent Susan Romash, who investigates child exploitation cases as part of the FBI’s Violent Crimes Against Children program. “We know the video has been traded on the Internet,” Romash said, “and we know this child is a victim who needs our help.”

In the video, an adult woman is heard speaking Vietnamese, and at one point her face is shown. “Our hope,” Romash said, “is that someone will recognize this individual’s face—or her voice—and come forward with information.”

The publicity efforts to identify and apprehend Jane Doe 39 are part of the FBI’s Operation Rescue Me and Endangered Child Alert Program (ECAP) initiatives.

Operation Rescue Me identifies child victims of sexual exploitation by using sophisticated image analysis to obtain evidence. ECAP seeks public and media assistance to help identify the John and Jane Does who display their faces—and other distinguishing characteristics such as tattoos—in pornographic images and videos of children.

“We know the video has been traded on the Internet, and we know this child is a victim who needs our help.”

The FBI has a longstanding partnership with NCMEC, which maintains a database of pornographic images traded online to help law enforcement coordinate and solve investigations. Working closely with NCMEC, FBI investigators look for metadata embedded within images that might contain GPS or other details that can reveal critical information.

“We also search for clues within the images,” Romash said. “Those clues often help us determine where the image was produced or who created it. If those approaches don’t work,” she explained, “but there is an adult in the image whose face is shown, we publicize it through ECAP and ask for the public’s help.”

The video depicting Jane Doe 39 and a child victim was first noted by NCMEC in April 2016. The woman is described as an Asian female, likely between the ages of 25 and 35, with long black hair. She is wearing a white, yellow, blue, and red floral dress. In addition, she could be heard speaking Vietnamese.

The FBI is seeking the public's assistance in identifying Jane Doe 39, a woman who can be heard speaking Vietnamese in this clip taken from a video in which a child is being sexually exploited.

Several naturalized Americans from The Gambia planned an unsuccessful coup against the government of their homeland in 2014, violating the Neutrality Act, a little-known federal law.