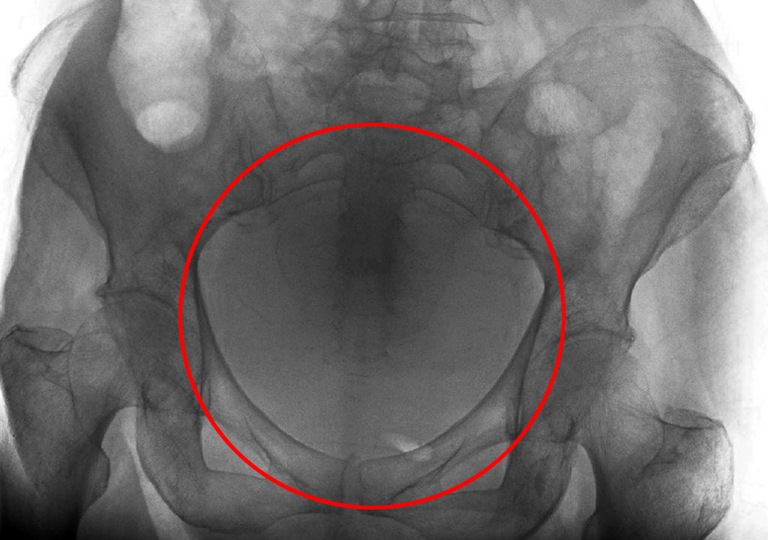 A Maryland health care provider was recently sentenced to prison for cheating insurers out of more than $20 million and causing patient deaths as a result. Part of the fraud involved creating false radiology reports that were never interpreted by a physician. In this patient X-ray, the non-physician who interpreted the image failed to identify a large pelvic mass that was likely an infected bladder requiring immediate treatment. Because the ailment went undiagnosed, no treatment was provided, and the nursing home patient died the following day.

A longtime Maryland health care provider was sentenced to 10 years in prison recently for cheating Medicare, Medicaid, and private insurers out of more than $20 million—and causing patients to die as a result.

“This was an unusual case,” said Special Agent Keith Custer, who led the investigation from the FBI’s Baltimore Division. “Most health care fraud that results in injury or death happens when providers illegally bill for unnecessary procedures. This case wasn’t about providing unnecessary care, it was about denying people the care they desperately needed and deserved.”

Rafael Chikvashvili, a 69-year-old Baltimore resident, owned Alpha Diagnostics, a company that provided portable X-rays and other examinations to patients primarily in nursing homes and retirement communities in the Maryland area.

Beginning in 1997, Chikvashvili conspired with others to defraud Medicare, Medicaid, and other insurers in a variety of ways, including by creating false radiology reports that were never ordered or interpreted by a physician. What caused at least two patient deaths, according to court testimony, was that Chikvashvili instructed his non-physician employees—including Timothy Emeigh, the company’s vice president of operations, who was a radiologic technologist but not a doctor—to interpret X-rays instead of sending them to licensed physicians.

A non-physician Alpha Diagnostics employee reviewed one nursing home resident’s chest X-ray images and failed to detect congestive heart failure. As a result, the patient was not transferred to an acute care facility for treatment—which is standard practice—but remained in the nursing home, where she died four days later. Had the patient been transferred, experts said, her symptoms could have been addressed.

A second patient had a chest X-ray as a pre-operative test to determine if she could safely undergo elective surgery. The non-physician Alpha Diagnostics employee who interpreted the X-rays failed to detect mild congestive heart failure. As a result, the patient was cleared for surgery, after which her congestive heart failure worsened. She died six days later.

“The vast majority of Alpha Diagnostic’s client base was from nursing homes and retirement communities,” Custer said. “This is an extremely vulnerable population,” he explained, “because it is not unexpected when they become sick and die. That was how Chikvashvili’s fraud was able to go on for nearly 20 years.”

“There is no telling how many patients suffered or died because of these crimes.”

In 2013, two Alpha Diagnostics X-ray technicians contacted authorities and said the company was upcoding—an illegal practice in which businesses bill insurance providers for more expensive services than were performed. The employees also said they suspected Emeigh was doing X-ray interpretations at Chikvashvili’s instruction and that real doctors’ names were being used fraudulently.

Custer and investigators from the U.S. Department of Health and Human Services Office of Inspector General began interviewing doctors whose names were on the X-ray reports. “It was clear from the beginning that the reports were fakes,” Custer noted. One of the doctors was living out of the country when the reports with his name were created, and others confirmed that their names and provider numbers had been used fraudulently.

Chikvashvili, who holds a Ph.D. in mathematics but was never a medical doctor or licensed physician, claimed through his defense attorneys he was unaware of any wrongdoing and blamed the situation on actions by his employees. But a jury heard evidence to the contrary. In February 2016, he was convicted on a variety of charges related to the fraud and was sentenced in June. Emeigh, 52, had previously pleaded guilty to health care fraud and was sentenced to four years in prison.

Emeigh told investigators that prior to the fraud scheme being shut down, he was doing nearly 80 percent of Alpha Diagnostics’ X-ray interpretations in Maryland—readings that should have been done by a licensed physician. “He probably did tens of thousands of them over the course of the fraud,” Custer said. “There is no telling how many patients suffered or died because of these crimes.”

After being convicted in the first-ever federal prosecution for spoofing, a futures trader who generated $1.4 million in illegal profits was sentenced to federal prison.

A new campaign encourages the public to submit information on suspected cyber scams and frauds to the FBI's Internet Crime Complaint Center.