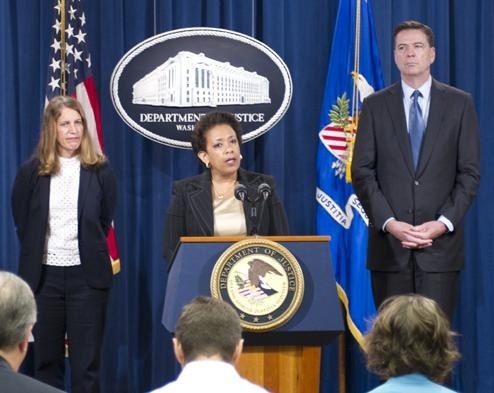 More than 240 individuals—including doctors, nurses, and other licensed professionals—were arrested this week for their alleged participation in Medicare fraud schemes involving approximately $712 million in false billings.

The arrests, which began Tuesday, were part of a coordinated operation in 17 cities by Medicare Fraud Strike Force teams, which include personnel from the FBI, the Department of Health and Human Services (HHS), the Department of Justice (DOJ), and local law enforcement. The Strike Force’s mission is to combat health care fraud, waste, and abuse.

At a press conference today at DOJ Headquarters in Washington, D.C., officials said the arrests constituted the largest-ever health care fraud takedown in terms of both loss amount and arrests.

“These are extraordinary figures,” said Attorney General Loretta Lynch. “They billed for equipment that wasn’t provided, for care that wasn’t needed, and for services that weren’t rendered.”

The charges are based on a variety of alleged fraud schemes involving medical treatments and services. According to court documents, the schemes included submitting claims to Medicare for treatments that were medically unnecessary and often not provided. In many of the cases, Medicare beneficiaries and other co-conspirators were allegedly paid cash kickbacks for supplying beneficiary information so providers could submit fraudulent bills to Medicare. Forty-four of the defendants were charged in schemes related to Medicare Part D, the prescription drug benefit program, which is the fastest growing component of Medicare and a growing target for criminals.

“There is a lot of money there, so there are a lot of criminals,” said FBI Director James B. Comey. He described how investigations leveraged technology to collect and analyze data, and rapid response teams to surge where the data showed the schemes were operating. “In these cases, we followed the money and found criminals who were attracted to doctors offices, clinics, hospitals, and nursing homes in search of what they viewed as an ATM.”

Since their inception in 2007, Strike Force teams in the nine cites where they operate have charged more than 2,300 defendants who collectively falsely billed Medicare more than $7 billion. Today’s announcement marked the first time that districts outside Strike Force locations have participated in a national takedown; those districts accounted for 82 of the arrests this week.

Here’s a look at some of the cases:

“We will not stop here,” said HHS Secretary Sylvia Mathews Burwell. “We will work tirelessly to prevent these programs from becoming targets and fight fraud wherever we find it.”

In fiscal year 2014, DOJ and HHS health care fraud and prevention efforts recovered nearly $3.3 billion. Over the past five years, DOJ specifically has recovered more than $15 billion in cases involving health care fraud. The average prison sentence in Strike Force cases in fiscal year 2014 was more than four years, though some prosecutions in recent years resulted have in sentences of 50 years.

A repeat offender who led a multi-state criminal enterprise will be serving a lengthy prison term.