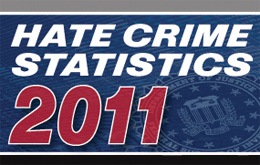 The data contained in this report, which is a subset of the information that law enforcement submits to the FBI’s Uniform Crime Reporting (UCR) program, includes the following categories: offense type, location, bias motivation, victim type, number of individual victims, number of offenders, and race of offenders.

Highlights from the 2011 Report:

Beginning in 2013, law enforcement agencies reporting hates crimes will be able to get even more specific when reporting bias motivation.

For example, the new bias categories of gender and gender identity—which added four new bias types—were added to the FBI’s hate crime data collection as a result of the Matthew Shepard and James Byrd, Jr., Hate Crimes Prevention Act. Other bias types were modified to comply with the race and ethnicity designations specified by the U.S. Office of Management and Budget. Data submitted under these new specifications will be part of the UCR program’s new system, scheduled to go online next year. (The 2013 crime data will be published in 2014).

- In December, two Mississippi men pled guilty to federal hate crimes for their roles in assaulting African-Americans in Jackson. More

- In November, a South Carolina man was sentenced for committing a federal hate crime against an African-American teenager. More

- In October, a Louisiana man pled guilty to charges of defacing places of worship and lying to an FBI agent. More

- In September, a jury in Cleveland convicted 16 defendants on federal hate crime charges for religiously motivated assaults on members of the Amish community. More

- In August, a Detroit man pled guilty to a federal hate crime charge, admitting he assaulted a victim because he thought the man was gay. More

- In April, three Houston men were sentenced to federal prison on federal hate crime charges related to a racially motivated attack against a man waiting at a bus stop. More

Hate crimes continue to be the highest priority of the Bureau’s civil rights program because of their heinous nature and their impact on victims and communities (see sidebar for case examples). We investigate hate crimes that fall under federal jurisdiction, assist state and local authorities during their own investigations, and in some cases—with the U.S. Department of Justice Civil Rights Division—monitor developing situations to determine if federal action is appropriate.

In addition to responding to hate crimes, we’re also taking a proactive approach to hate crimes overall. We’re integrating a cadre of analysts with our experienced investigators to not only establish a national threat picture but to identify risk factors that can be used by FBI field offices to assess the potential for hate crimes at the local level.

Most of all, we’re working to increase awareness of these crimes by establishing liaisons with civic and religious leaders and credible community organizations. Through our UCR program, we offer training to help law enforcement recognize hate crimes and also assist our partners in developing their own hate crimes training programs.